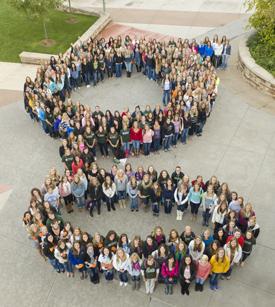 Along with changes in physical appearance, CSU is making changes involving department names to better reflect the focus of the departments.

Jeff McCubbin, the dean of the CHHS, said this change began more than two years ago.

“It was likely in the best interest of the college and university to consider a more appropriate name for the college,” he wrote in an email to the Collegian.

McCubbin said although the final decision was left in the hands of the Board of Governors, student input was taken into consideration.

“Because it required approval by all levels of administration at CSU, there needed to be many brought in on the discussion and decision,” he wrote.

McCubbin said the name change in the case of the College of Health and Human Sciences was to make a more accurate reflection of the college.

“I believe that ‘Applied Human Sciences’ is not a very clear title that does not describe our college,” McCubbin wrote.

Along with the change in name, the department is also emphasizing the work they are doing.

“New efforts to acknowledge the work we are already doing in health is important,” he wrote. “But also to address new ways to consider many programs across CSU that ultimately enhance health.”

Another office at the university that went under a new name is the Office of Fraternity and Sorority Life, formally the Office of Greek Life. Amy Bell, a program coordinator, said the change was “to be more consistent.”

“We’d been talking about changing the previous office name, Office of Greek Life, for a while,” said Jody Donovan, dean of students, in a news release.

According to Bell, the name had been approved since November 2012, but they held off until now to change it in order to put all efforts into putting it in full force this coming year. She said they are implementing a new website and marketing materials.

Donovan said this name change came to clarify exactly what the office is about.

“We recognized that as we internationalize our campus, that name was confusing for individuals not familiar with fraternities and sororities,” she said.

“You don’t get a real picture by the name the Office of Greek Life,” Bell said.

Unlike the change in focus with the College of Health and Human Sciences, the Office of Fraternity and Sorority Life will still hold their traditions. Events such as Greek Week and Greek Night Out Awards will not change in name, according to Bell.

“Identifying our fraternity and sorority members as ‘Greeks’ is still a proper reference in that their history and names are based on the Greek alphabet and Greek mythology,”said Sonja Jensen, the director of the Office of Fraternity and Sorority Life, in the same release.

Content Producer Katie Spencer can be reached at news@collegian.com.