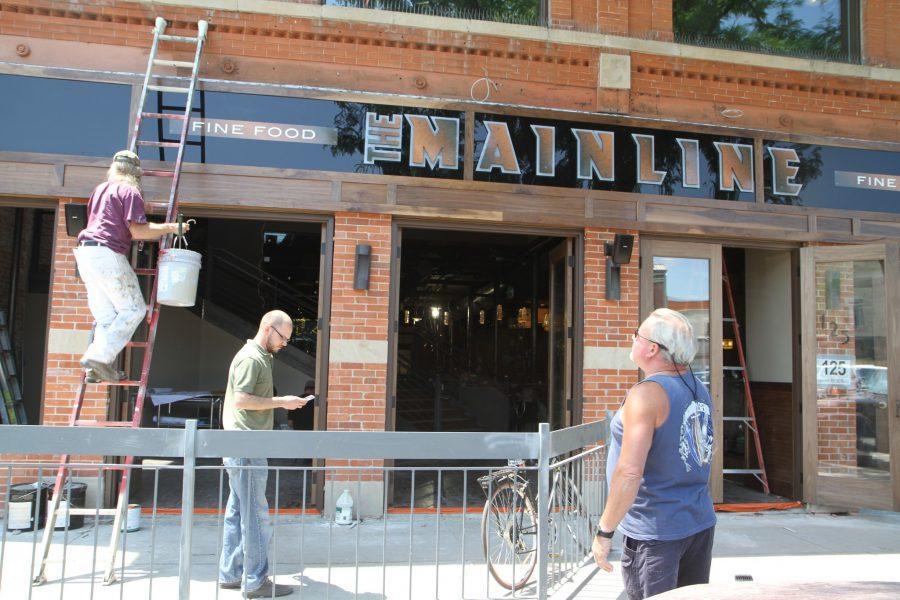 Coming soon to Old Town — yet another space to enjoy craft beer in Fort Collins.

Breckenridge-Wynkoop LLC’s first Fort Collins restaurant, the MainLine, is anticipated to open at the end of the month. Restaurant-goers can expect a southern-inspired ale house with two levels featuring unique identities.

According to Lisa Ruskaup, concept director for BW, the company decided to open a restaurant in Fort Collins because they find the city to be “vibrant and the people of Fort Collins and the surrounding communities to be warm and welcoming.”

“The characteristics that represent our core Ale House mission of Good Food, Good Drink, Good Cheer, include a focus on Colorado-centric premium beer, wine and spirits, as well as chef-driven cuisine and thoughtful hospitality,” Ruskaup wrote in an email to the Collegian.

The MainLine is currently under construction in the space formerly occupied by Beach House Grill. The format is a restaurant atop another adjoining restaurant, according to Ruskaup.

“The main level, the MainLine, has several areas for unique dining and drinking experiences,” Ruskaup wrote. “The upstairs has its own identity.”

BW has requested the name of the upstairs space not be released prior to the opening.

Two bars will feature 32 taps of craft beer, wine and cocktails. 24 taps will be craft beers from Breckenridge Brewery and Wynkoop Brewing, plus other nano and craft breweries. The remaining five taps will feature custom-craft wines and handmade cocktails.

“All of these elements of the concept were customized for the Fort Collins market based on extensive research and feedback through the online and actual communities,” Ruskaup wrote.

“Sounds pretty awesome to me,” said Hannah Cornish, a CSU student. “There’s no such thing as having too many places that serve great beer, especially here in FoCo, so I’m really excited to try it out once it opens.”

According to Ruskaup, the MainLine’s name was inspired by several historical points in Fort Collins, but mostly came from all the metal columns and water pipes throughout the building.

According to Marty Jones, a spokesperson for Wynkoop Brewing, Wynkoop’s beers are now also on shelves in Fort Collins stores as part of the first expansion of their Denver/Boulder distribution area in two years.

“We’re thrilled to have our mighty creations in the land of such beery heroes as New Belgium and Odell Brewing, and among the growing crop of microbrewing newcomers and fine-beer vendors in Fort Collins,” Jones wrote in a news release.

The MainLine: A Fort Collins Fable, provided by Lisa Ruskaup:

On, or about 1920, Old Town Fort Collins was not really old, but rather, quite new.  In its first life, the building that resides at 125 South College, just off the bustling intersection of Mountain and College avenues, or ‘Main and Main’, was a flourishing drug store, A.W. Scott Drug. As was the common practice of the day, upstairs above the AW Scott, lived many lovely Fort Collins friends (if these walls could only talk).  Running north and south along College Avenue, was the railway, a mainline of sorts, for these same townsfolk to travel about.  The super rocking, felled-tree trunk table near the kitchen is backed by a mural of the AW Scott and is known as same for all these hardworking folks.

But our story of the MainLine begins well before the actual building was erected in its current location.  In fact, we have to look all the way back to the origins of Fort Collins for early inspiration to the MainLine name.  Fort Collins, was originally known as Camp Collins, a U.S. Army outpost on the Poudre river.  The camp, near the Overland Trail, was formed in 1864 to act as a mainline of commerce, and mail delivery, for homesteaders along the Denver Road.  Frankly, we find this version of the MainLine story, a little boring.

Rumor has it that Butch Cassidy, and perhaps his horse who lost a horseshoe that we found, did make a stop in Fort Collins before or after robbing the bank of Telluride, on or about 1867, which is near the time our next great hero, Elizabeth Adler, introduces herself as a powerful force on the mainline Fort Collins political scene.  It took Elizabeth nearly two more decades to lobby for the right to vote, which passed in 1893 for Colorado women and Elizabeth in Fort Collins.  Her first act as a red-blooded female American voter was to outlaw all alcoholic beverages in the city of Fort Collins.  It passed.  Much to the chagrin of her male council members and unwitting abstainers, this law stood longer than any other ‘temperance law’ in the state of Colorado, until 1968.  Our Temperance Lounge is devoted entirely to this remarkable woman and Colorado’s longest-standing dry city, Fort Collins. It is ironic in a place known as the Napa Valley of craft beer.

Legend has it that the Dig, the long vertical hand-dug channel running through the brick near table number 100, was the handiwork of none other than Daniel ‘the digger’ Smith.  After we peeled away layer upon layer of sheet rock and paint, the Dig was revealed in all its glory.  Rumored to have tried repeatedly to dig a main line out of prison in the early 1900’s, Digger Smith was said to have rented a room upstairs from the AW Scott.

There are two or three distinctive physical feature about the MainLine building that stood out from the very beginning.  Of course, no one can miss the Burl, that’s the massive duct that snarls its way overhead and throughout the space, heating and cooling our guests and acting as an unquestionable ‘mainline’ for the air we breathe.  And, from the beginning there were all the enormous water main [line] pipes that, not only supported the water needs of our building, but the entire city block.  We painted most of them red so you can see them.  Ask us for a tour of the catacombs.

Let’s talk about all those trees.  We now fondly refer to them as the Treeline and the Treehouse.  However, when the owners of Breckenridge-Wynkoop first feasted their eyes upon the space that would become the MainLine, they could only see one thing… a forest of metal columns.   What on earth were they going to do with all these impediments?  In exactly the same way they embraced all the massive ductwork in the ceiling for air to breathe, and all the mainline water pipe for fire and water safety, they embraced the columns as a massive forest of epic proportions. There are a few special trunks among the masses…the Old Main [line] is located front and center on the main level and is engraved with the initials B&W for our founding forefathers, Breckenridge Brewery and Wynkoop Brewing [we love those guys]. There is an odd square tree falling behind the treehouse bar.  You’ll have to ask your barkeep [or the general contractors] about that one, as it’s a special case.

The Cliff and the Ghost mural have been inseparable from the beginning.  Those who love the action, know the Cliff well and ask for it by name.  It is our vibrant main floor lounge that interactively opens to College Avenue and glows with the warmth of new amber light against old stucco and brick.  But the legend of how the Cliff got its name has everything to do with the other side of that infamous old brick wall.   The brick holds tight to invisible history, something known as a ghost mural.  Cool.  According to experts, this means that something old and wonderful was once painted here and vestiges remain.  That makes it sacred and untouchable.  Other experts believe that a Colorado-inspired cliff was once erected on the inner portion of the brick.  [A ghost cliff, of sorts.]  Can you see it, yet?

The Glasshouse is our gargantuan glass room at the back of the building that is designed for anything incredibly awesome you might imagine.  It is full of light and sound and yet quiet and private and wonderfully and easily located in the middle of our restaurant.  Seeing as our building is so large, we thought we would name the room after the  beloved skyscraper in downtown Denver.  We hope you love it as much as we do, and ask for it by name for anything your heart desires.  Did we mention it is fully-wired for anything you need and accommodates up to seventy-five guests.

The Treehouse is the whimsical younger sibling of the MainLine.  Everything is so right and yet…there is something materially fascinating about what has been going on up here.  We like the music and we’re in a bit of a time warp, but it’s all good.

Speaking of the treehouse, which really ought not be spoken of out loud, the bar is something of legend.  It is constructed from resin and all the stuff any respectable kid ever wanted to save in their treehouse.  Sit there and look down into a lighted treasure-trove of your childhood: every bad-ass, cool, trouble-making thing you ought-not have, is buried in the resinous top just glaring up at you.  Pause, brother or sister, and have that drink.  We make them well.  Perhaps you should powder your nose, or whatever else it might be that clears away the cobwebs. Remember to pay respects to our fearless scout leader mural. You’ll be ready for another run at that treasure chest, pirate.   We promise, scout’s honor, not to divulge who else was in the treehouse.

The Owl and the Rooftop is the historic cigar advertisement keeping watch on our rooftop patio and who…was here.  Hang out and see if you can watch the owl watching you.  The rooftop patio serves lunch, dinner and late night seven days a week and may be booked for private events.

Somewhere around 1999, a famous musician is rumored to have passed through town and likely set foot on what is now known simply as the Catwalk.  We’re told, on good authority, that what might very well have been the inspirational road trip to Portland Oregon for Jack White, then with Meg of the White Stripes, may have included a pit stop in our fine establishment.  Just in case, we’ve decided to pay homage with our nightly last call of MainLine tap Sloe Jane Fizz (our version) and a house-rocking rendition of Portland Oregon featuring Loretta Lynn and our hero, Jack White.  Take your seat on the Catwalk, in case he shows up again some day.