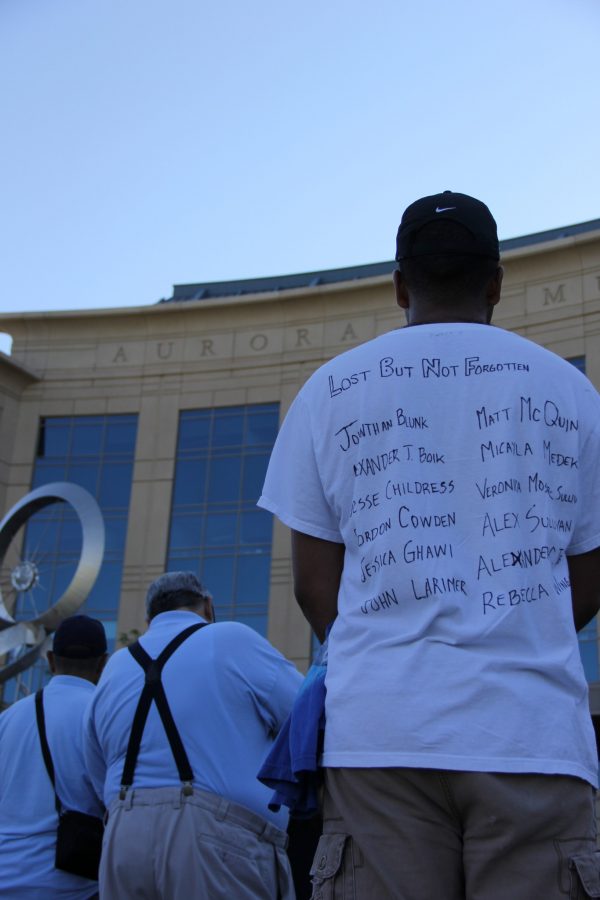 The summer of 2012 was one of Colorado’s toughest seasons to get through in recent history. The state battled numerous large and destructive wildfire blazes throughout the heated months.

However, a mass shooting in Aurora was the story that captivated global attention for weeks. One year ago, a gunman entered the Century 16 Theater in Aurora, shooting 70 and killing 12.

The city of Aurora celebrated the lives lost in a memorial service at the City Municipal Center on Saturday.

“Part of remembering the incredible loss that happened a year ago, is being able to appreciate how beautiful this (memorial) is, and that we almost have an obligation to immerse ourselves in life,” said Gov. John Hickenlooper.

Hundreds attended the memorial. The event consisted of prayer, music and a call to community service to the public. Prior to a wreath laying ceremony to honor those lost, the names of the deceased were read aloud by the governor and Mayor Steve Hogan of Aurora, each name followed by a single ring of a bell.

Many who attended the event were either in the theater during the shooting, or had friends who were lost. Among the attendees was CSU football player Zack Golditch, who was shot in the neck.

Also in attendance was Bonnie Kate Pourciau. The night of the shooting, Pourciau was on her way home to Baton Rouge from Seattle, where she was on vacation. Aurora was the city they stopped in to rest for the night. What was meant to be a night’s stay, ended up being weeks in the hospital, after Pourciau took a bullet to the knee.

“It was really dark and scary, and loud,” Pourciau said. “There was a real sense (of) evil.”

Pourciau acknowledged that the environment was like a war-scene in nature. However, she claims that she was calm through the entire ordeal.

Also in attendence were many of the first responders to the movie theater. EMT Andi Carpenter was one of the medics who attempted to save the life of the youngest victim to die, six-year-old Veronica Moser-Sullivan.

Although Carpenter did not personally know anyone in the theater, her connection to the young child drew her to the memorial.

“This is something I absolutely had to be at. I feel so much better for being here,” Carpenter said. “I realized it is okay to remember. Even though it is hard, it is better than forgetting.”

The one thing the event planners wanted to ensure was that the gunman would not be the focus of the event. They wanted the day to be about celebrating life, rather than residing in the past.

“I give tremendous credit to Mayor Hogan and the Aurora city council for moving forward. They’re not going to let themselves be defined by this one horrific incident,” Hickenlooper said. “What James Holmes meant for evil, God really has used for good. I’ve seen it in small ways, and others all around.”

“Aurora, (in) Greek mythology, is symbolic of the sun rising from the east and the beginnings,” Hickenlooper said. “Aurora is going to redefine itself as a place where things begin and grow fresh and anew. We will remember. This is the next chapter. “