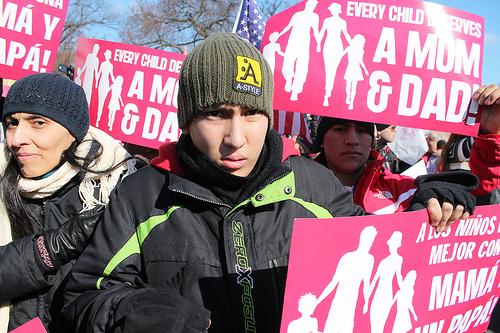 The Defense of Marriage Act was ruled unconstitutional by the Supreme Court Wednesday with a 5-4 vote.

DOMA defined marriage, federally, as a union between a man and a woman. Though DOMA was ruled unconstitutional, Colorado will have to amend Colorado Amendment 43, in order to enter into a same sex marriage in Colorado, said Courtney Daum, a Colorado State constitutional law specialist.

“I would assume we would see litigation in Colorado,” Daum said.

The CSU LGBT community is celebrating the victory as one step closer to equality.

“It tells a college student, who dreams of marrying their significant others, that they can do that,” said Foula Dimopouos, GLBTRC director at CSU. “I think that all of this is about making it an equitable and fair world. … I think the other piece though, is broader in that, for many people in the LGBT community, it also means that a law that has been utilized to degrade and invalidate their lives, has been undone.”

“It’s a step in the right direction but by no means are we there yet,” Polizzi said. “Now we can focus on equal benefits, hospital visitations, adoption and health insurance. (I am) pumped that it got turned down, and still more work to be done.”

Colorado politicians who represent the Fort Collins area were quick to praise the decision.

“Every couple should be able to make a public affirmation to their communities, families and friends of their shared commitment and responsibilities to the person they love, regardless of their sexual orientation,” said Mark Udall, U.S. Senator for Colorado, in a written statement. “Today the U.S. Supreme Court affirmed Colorado values and the U.S. Constitution’s promise of equality. Promoting the commitment and shared responsibility that comes with marriage strengthens our families, our communities and our nation. I’m proud to stand with Coloradoans celebrating today’s groundbreaking decisions and pledge to continue fighting for full marriage equality.”

Colorado Congressman Jared Polis believes the ruling is a ‘tremendous victory’ for the country.

“The Supreme Court, in striking down the Defense of Marriage Act, affirmed the love and commitment of married gay and lesbian couples around the country,” Polis said in a written statement. “But there is still more work to do and we must use the strength of this momentum to ensure that all LGBT people and families in Colorado and throughout the country are treated equally under the law and have a fair shot at the American Dream.

“The focus of conversation has been all wrong for years,” Albright said. “The question that should be focused on is ‘what role does government have in marriage?’ And the answer to that is ‘none.’ No power should be granted to the federal government to grant or deny the recognition of marriage, it should be left to the church to decide.”

For now, advocates of government-recognized gay rights are celebrating.

“At the end of the day, I think what I would hope that our students, as well as people all across the state,” Dimopouos said. “Remember is that there are times in our history that people have fought for equal rights and equity, and that we have stood and continued to stand on the shoulders of giants, and this is one of those times that the lives and loves of our LGBT students and the folks that support them are reaffirmed, and there is much to celebrate.”