Is your water still safe to drink? 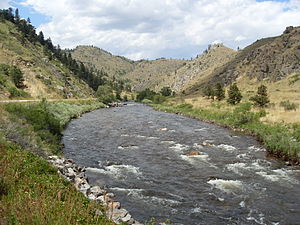 Poudre River as it flows through Larimer county

One year after the High Park Fire, concerns over water quality are still significant. Because of last year’s fires, there was an increase in the concern over potential contamination of the Fort Collins water supply. With the summer storms and the late spring snow melt, there is an increased likelihood that runoff would cause debris and ash from the fire to settle in the town’s water supply.

Fort Collins gets it drinking water from the Poudre River which was contaminated during the fires last year. However, Fort Collins Utilities has been working to ensure drinking water maintains its high quality and meets or surpasses all state and federal regulations.

In order to do this they have been working on a number of measures to remove or reduce the amount of sediment in the river. One of the steps they have been taking is to drop mulch in affected areas that are at risk of polluting the watershed. Fort Collins Utilities are using certified weed free straw and seed which works by breaking up the raindrops as they impact the ground, similar to the effect pine needles would have by lessening the force of the water before it soaks into the burned earth.

Fort Collins also approved a four percent increase in utilities last year to help pay for the cost of treatment. As a result of the increased revenue on Tuesday, June 18 the city of Fort Collins started using a new water quality basin that will help to reduce the amount of sediment in the Poudre River before it hits the town’s water treatment plants.

The Pleasant Valley Presedimentation Basin was built early to help address concerns over summer run off. The basin was built next to the Munroe Canal, north of the mouth of the Poudre Canyon.

“Everything we are doing operationally is to support the quality of water our customers expect as well as regulator requirement projects such as the presedimentation basin demonstrate operational excellence needed to meet those expectations. ” stated Lisa Rosintoski with Fort Collins Utilities.

Fort Collins Utilities can be reached at 970-221-6700 for further questions about water contamination.

Editor In Chief Darin Hinman can be reached at news@collegian.com.