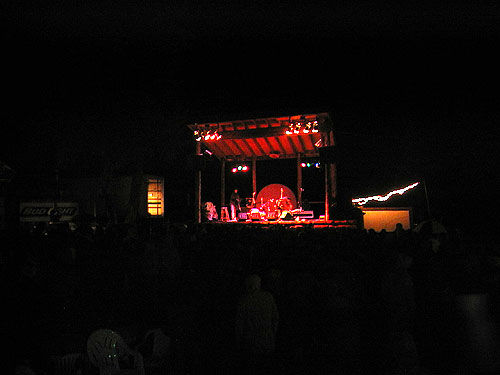 The first thing Dani Grant smelled upon returning to her beloved Mishawaka Amphitheatre post-High Park Fire was the “god-awful stench of rotting food.”

“We had $10,000 of food at the Mish with no ability to keep it cool,” said Grant, owner of the Mishawaka, located in the Poudre Canyon.

From June 9 to July 4, 2012, the Mishawaka was closed down due to the threat of the High Park Fire, which burned more than 87,000 acres in the mountains west of Fort Collins and destroyed 259 homes and structures.

“We heard news that the fire had started and we were waiting on pins and needles because we just got through the Hewlett Gulch Fire,” Grant said. “We actually had a show gearing up to start and we knew the fire was coming.”

Grant said after being shut down just days earlier from the Hewlett Gulch Fire, it was “absolutely defeating” to think they were heading down that road again.

Grant had no idea just how extensive the process would be.

Throughout the entire time the fire burned, she did not know if her business would even survive.

“We would receive calls from people with good intentions saying they thought the Mish had burned and, you know, I would hold my breath because it wasn’t coming from the fire marshal,” she said. “Still, you go into a sense of panic and until we set foot on the property, we weren’t quite sure.”

Grant said she was prepared for the worst, but tried to think motivational thoughts: “This building has been here for 100 years — why now? It’s survived everything else.”

Upon returning to the Mishawaka, Grant said she remembers that day so clearly.

“So we go through the military gate,” Grant said. “And the National Guardsman asked me, ‘Is the Mish yours? I’m from Colorado and this is my favorite venue and I wanna tell you it’s fine.’ My heart was racing.”

Kevin Thomas, assistant manager and manager on duty during both the Hewlett Gulch and High Park fires, described the scene as he arrived at the Mishawaka with Grant, her husband and eight others.

“As we were on our last mile or two driving to the Mish, there was a break in burn areas, until the last turn before the Mish,” Thomas wrote in an email to the Collegian. “It was black. My heart sank, we made the turn, and the beautiful Mishawaka still stood, basically surrounded by blackness on all sides.”

“Once we were there, we spent about six hours cleaning up the maggot infested slop that was once our refrigerated food and threw away every bottle of booze we had,” Thomas wrote.

On the bar, Grant found a note from David Vitwar, who was in charge of fire protection for the Mishawaka’s zone.

The note explained how all the firefighters knew the importance of the Mishawaka, did everything they could to save it and fought hard.

“Long live the Mish,” it read.

“That’s when I lost it,” Grant said. “I finally could kind of let go. That letter is framed in our bar.”

Grant and her employees got to work cleaning up, as one by one, firefighters came up to her to talk, tell stories and show pictures of the Mishawaka. They explained how they fought off the flames as the Mishawaka came into the critical line of the fire — not once — but three times.

“The Mish truly would not be there if it were not for the firefighters,” Thomas wrote. “This experience gave me a epic appreciation for what firefighters, and even more so, what volunteer firefighters, do.”

Despite the major financial hit of not being able to work for nearly a month, Grant only had one employee leave.

“(It was) inspiring to me that they were willing to go through that with me,” she said.

Unfortunately, business was “a wash” for the rest of the season, Grant said.

“There was a surge of people who made an effort to come up there directly to support businesses in the canyon and they were godsends,” she said. “A lot of people were trying to be respectful and avoided the canyon, but (it) killed our business for the rest of the summer.”

In the midst of dealing with financial hardships, however, the Mishawaka High Park Fire benefit concert featuring Head for the Hills and the Motet, along with money donated from patrons at others shows, raised $26,000 for the Poudre Fire Authority.

“That was the highlight of my career — handing them that check and a thousand people screaming and cheering for them up on stage,” Grant said.

Grant said she felt it was her mission to keep the Mishawaka — a place special to so many people — in tact.

“People were married there, met there, saw their first live music there,” Grant said. “The one thing the whole experience did for me was give me an incredible recognition of the Mish having been around for so long and having been a special part of so many lives.”

Managing Editor Emily Smith can be reached at news@collegian.com.