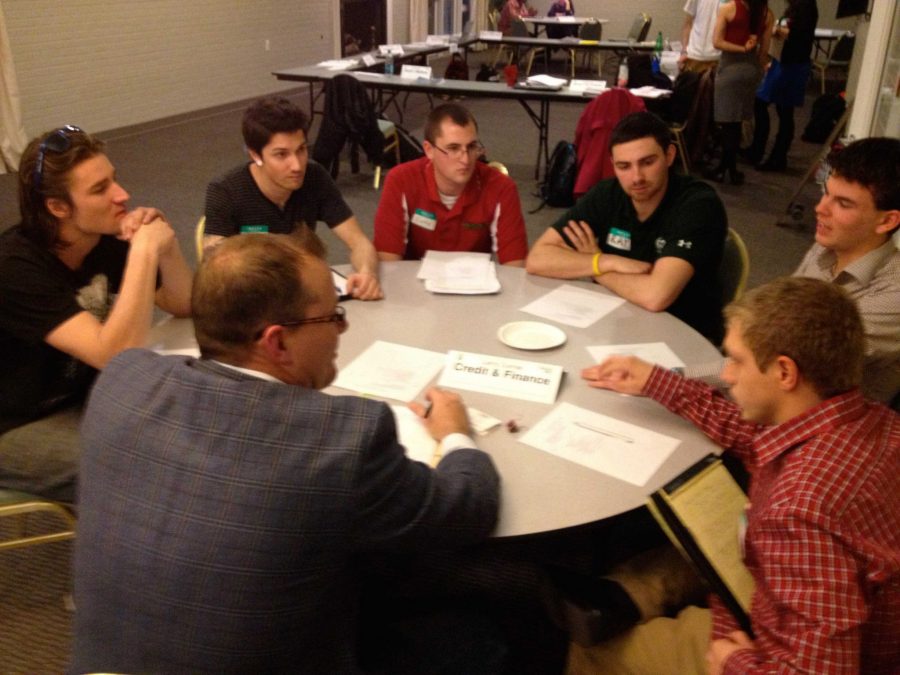 Venture Accelerator students, from left to right, Dillion Martin, Eric Beardslee, Cody Jones, Ray Chard, Menno Axt and Mitchel Friermood participate in a round table discussion with advisor Larry Curran, of Vion Investments. All of the students are trying to raise money for their small business ventures through CSU's new crowdfunding platform, Charge.

Let’s say you belong to a CSU chapter of a national organization and your group wants to go to the national conference but just doesn’t have the money. Or, maybe you have a cool research idea, but your department doesn’t have the funds to get it off the planning board. Well, Colorado State’s new crowdfunding platform, Charge, might just be the solution, garnering the help of the Fort Collins community and CSU alumni to fund university-affiliated projects.

Crowdfunding is a relatively new concept in the university realm; in fact, CSU is the first university in Colorado to adopt such a platform. Crowdfunding runs on the idea of lots of people making small donations to a project or cause. In the case of Charge, anyone can donate any dollar amount over $10 to a project, which has a certain time period to reach a predetermined monetary goal. The technology used to develop Charge itself is unique, the result of a collaboration between CSU and Community Funded, which adapted and tailored its existing crowdfunding technology to the needs of the university.

“It is so cool to have a university, our alma mater, that embraces technology to be innovative and two, three, four years, however long, down the road to look back and to know that they were the first, is going to be really cool,” McCabe said.

Charge has been in the planning stages for almost a year, but as of June 14, it officially started off its beta testing period. During the summer, the platform will go through two testing phases, after which, it will be analyzed for success and made available university-wide if deemed effective in fall 2013.

Charge will first be tested and utilized by students from the 2013 Venture Accelerator program, a yearlong program in the College of Business that provides training, mentoring and advising to student entrepreneurs of any major. Some of these student-run and designed ventures are now the first projects up for funding on the Charge website. In just one week since its launch, the ten projects live on the site have already raised over $2,000 together.

“Charge defines rapid movement and momentum. This is in essence the current state of our company,” said Venture Accelerator Dillon Martin in an email interview. Martin, who graduated from CSU in May with a degree in mechanical engineering, hopes to raise $12,000 through Charge so he can build a larger and more efficient production facility for his company Anonymous Longboards, which manufactures customizable longboards. “We are charging forward, progressing daily and making innovative moves that redefine the way longboards are made and ridden.”

Venture Accelerator Kellie Walters, who earned her master’s in health and exercise science at CSU, said she believes that the platform provided her and her project partner, Chrissy Schaefer, who is working on her Ph.D. in health and exercise science at CSU, the motivation to get their company and ideas off the ground. Schaefer and Walters hope to raise $3,000 through Charge to develop an afterschool program, SmartFit Girls, for adolescent girls focused on increasing self-esteem and forming a positive body image.

“It’s so unique for a university to do this, as you know, this is the first time that CSU is doing this — talk about student development. They are putting everything on the line for us to try and pilot this and try to see if it works. This is risky; it’s not guaranteed and I think they are really doing everything they can to help develop us as students, as entrepreneurs, as people,” Walters said.

The second phase of the beta test period will be conducted by the School of Biomedical Engineering, which will experiment with projects focused on scholarships, graduate student travel and community outreach.

All money raised through Charge during the beta test period and if it continues into the fall will go to the Colorado State University Foundation, a not-for-profit that houses the university’s gifts and funds, where it will then be disseminated to the appropriate funds or projects. In the case of the Venture Accelerator students, the money will go to the Business Advancement Fund and then to the individual student projects. This also means that since donors are giving money to a non-profit, they may get a tax deductible, another incentive to donate.

The idea of crowdfunding also appealed to the university because it provided a more personal project-donor relationship. Currently, if alumni donate money to the university, they do not really see the impact of that money or whom it helps because it goes into a giant unrestricted fund. But, with Charge, the donors see a face, a project, a goal and an end result associated with their donation.

“I see it growing into an opportunity for people to really personalize their giving and to really give to projects that they are passionate about at CSU,” said Meg Weber, Executive Director of Annual Giving and Donor Relations for CSU.

The beta test period will give Charge the opportunity to identify and fix any problems in the platform, determine guidelines and analyze its success as a viable fundraising method.

“[Charge] is very new and with anything that is brand new, there is a lot to learn,” Schaefer said. “I don’t think there is any reason not to try, I guess is sort of our perspective on things. If provided this opportunity, why not go for it?”