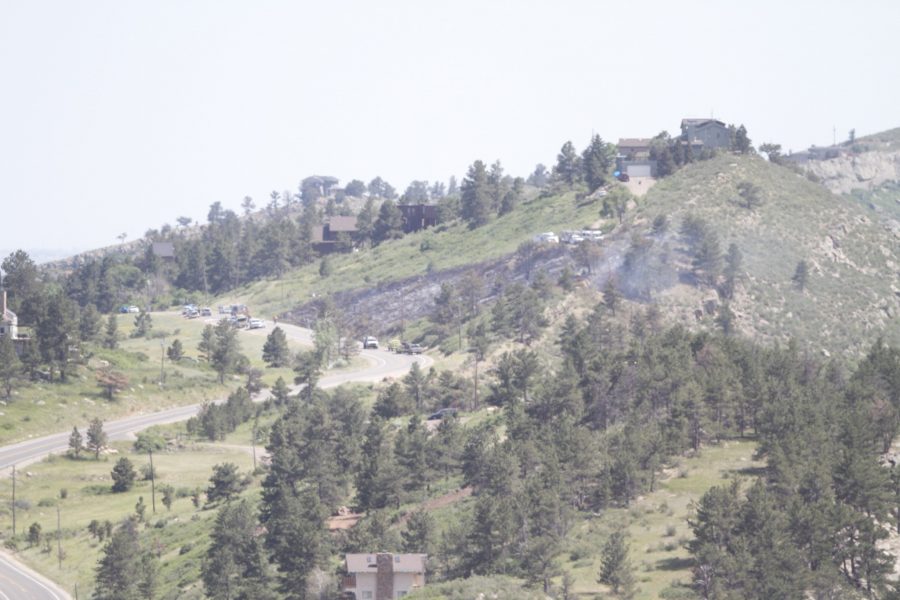 A view of the burn area and local firefighters containment efforts

According to a press release on Thursday, “an improperly discarded cigarette was the cause of this fire.”

90-degree temperatures and winds helped the blaze climb a hill West towards Horsetooth Reservoir.  Nobody was injured in the blaze.

Larimer County Sheriff and Fire Department was able to contain what is now being called the sailboat fire. Only a few local residents and customers of Sail and Saddle were effected.

According to local resident Christie Bertran who’s home was located next to the burn area stated, “There were friends down in sail and saddle and they looked up and saw the flames and they got evacuated from sail and saddle.” Christie’s father was also at their home located next to the blaze and was unaware of the fire because the local police were not letting residents back into the area. He was eventually notified by the fire department but was not required to evacuate. The fire itself was about 2 acres large before being contained.

The Sailboat Fire on Centennial Drive has been 100 percent contained.

The fire on Centennial Drive has been named Sailboat Fire. The fire is currently on private property and has grown to two acres. According to Larimer County Sheriff’s Facebook page, efforts have begun to “mop up” the fire.

Larimer County Sheriff has recently closed Centennial Drive between CR42C and CR38E due to a grass fire.

Also air drops from Single Engine Air Tanker (SEAT) have been started in efforts to contain the grass fire on Centennial Drive.

The sheriff’s office states that there are currently no structures at risk. As of now there have been no evacuations ordered.

Check back for further updates

Collegian staff can be reached at news@collegian.com