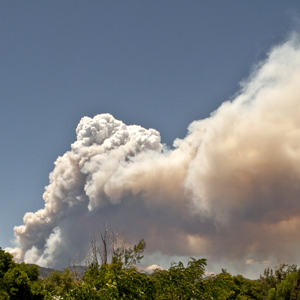 El Paso County is currently fighting the most destructive wild fire in Colorado history.  According to reports from the El Paso County PIO, as of 10 a.m. Thursday morning, 360 homes are lost.

Due to the rapid spread of the fire, residents of El Paso County are no longer allowed to access the fire areas for any reason.  According to Sheriff Maketa, the heat from the flames is so hot that they are trying to keep citizens away from the burn area and its surroundings.

The Colorado National Guard is currently on scene, aiding the firefighters in relief efforts.  There are no reported human injuries or fatalities. Animals that were left behind in the burn area are being collected by authorities and can be found at the El Paso County Fairgrounds.

Check back for updates on Collegian.com, including the fire’s affect on CSU students living in the area.