The Rocky Mountain Collegian • May 6, 2013 • https://collegian.com/articles/news/2013/05/tuition-fee-increases-discussed-in-first-day-of-board-of-governors-meeting/ 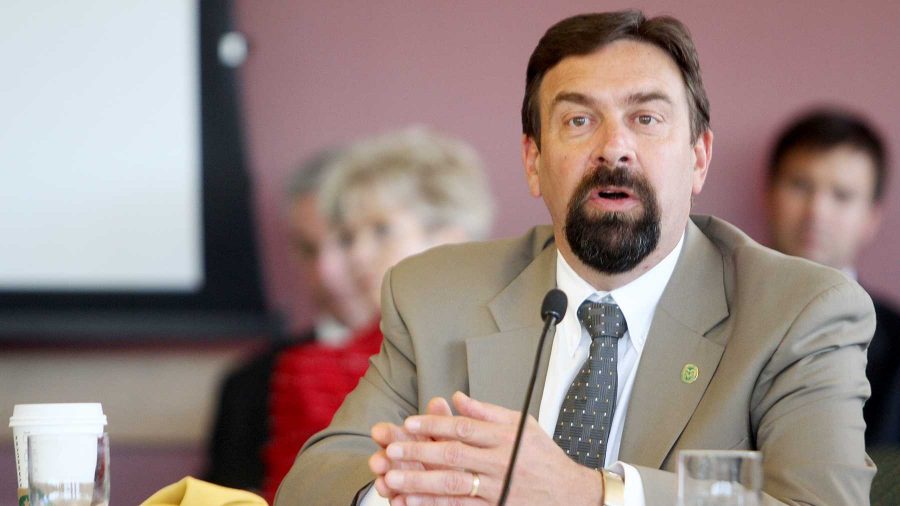 President Tony Frank addresses the board of governers at their Regular Board Meeting on Friday. The board elected Dorothy Horrel of Wheat Ridge as chair at this meeting.

CSU students will see tuition increase 9 percent this fall, after the CSU Board of Governors approved tuition and budget proposals from the system’s three campuses May 3.

All eight of the voting members present elected to approve the proposals, after participating in two days of presentations and committee meetings on the Fort Collins campus in the Lory Student Center.

The total amount to attend CSU next year will rise $1,158, or 6.2 percent, if the board gives final approval to the budget in June 2013. The increase includes a $619 increase for in-state undergraduate students, $494 increase for room and board, and $45 increase in student fees.

The latest increase is nothing new for students. As state funding to higher education has decreased, universities often raise tuition to fill the budget gap. At CSU, state funding has decreased $33.3 million over the last five years, while tuition has increased just over 68 percent during that same time frame.

“We had a slight increase in state funding this year but it probably won’t match the enrollment increase,” Frank said. “So state support on a per-student basis will probably continue to decline. Ideally for next year, if the state is in a position to start to return some of the funding to higher ed that’s been cut in recent years, we would love nothing better than to be able to keep that tuition down.”

Nigel Daniels, president-elect of the Associated Students of CSU, said the extra money would help to increase the value of a CSU degree and “hopefully enhance their experience while they’re at CSU.”

“It’s important for students to be involved in the conversation about tuition and fees because that sends a message to administration about what the true student viewpoint is on the issue,” he added.

After years of pay freezes for faculty and staff, a 3 percent pay increase was also approved. At CSU–Fort Collins, this would largely be paid for with the $45 student fee increase.

With the CSU System payroll approaching $500 million per year, this means an additional $15 million in salary would be paid out in 2013-2014. CSU Chancellor Mike Martin said every year that faculty and staff went without a raise helped the budget during tough economic times.

“Faculty and staff have been subsidizing something they care about,” Martin said.

During public comments session, many people filled the seats of the meeting to voice their opinion on the on-campus stadium that CSU–Fort Collins administration plans to construct in the coming years. However, the Governors limited their time to talk on the issue because it wasn’t on the agenda for the day.

“We are not taking any action or conversation of the stadium today at our board meeting,” said Joseph Zimlich, Board of Governors chair.

Zimlich asked the filled room if someone was there to address the board with another issue. Only one person raised their hand.

Ten minutes were given to each attendee to speak. All who spoke were against building the stadium.

“We need to consider the real ramifications economically, environmentally and traffic-wise. This is an institution of higher learner and we need to gear ourselves towards that,” said speaker Dalton Zerlan.

Others voiced their concerns about the chance of more riots with the new stadium. Fort Collins resident Jody Johnson spoke and pointed towards a news article of the student riot that happened last week.

“This happened two blocks from where I live. I live a block from where this stadium will be,” Johnson said.

Zimlich said the board will look into more venues for public comment on the stadium in the future.