No. 1 CSU lacrosse take down No. 2 CU on their way to 4th straight RMLC Championship 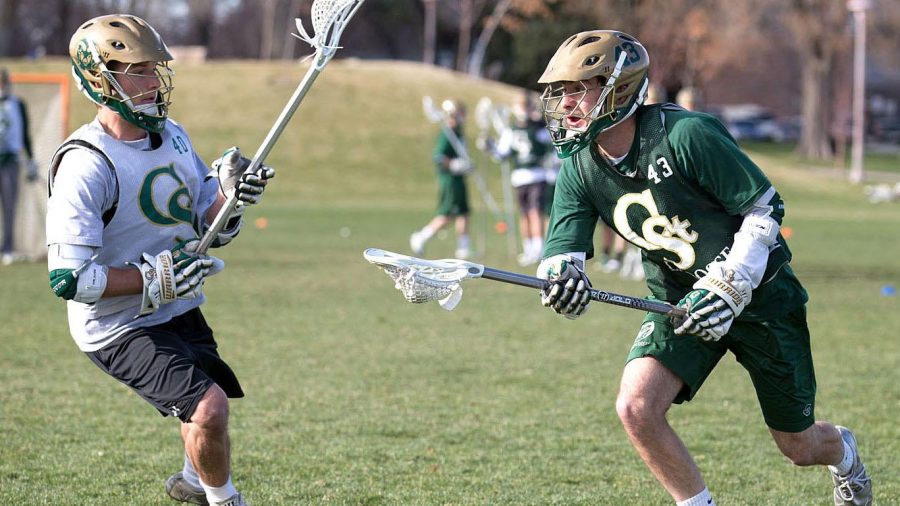 Midfielder Ethan Lahoda looks for a spot to shoot at practice last week. Tomorrow at 5 p.m. the lacrosse team will face off against CU at Hughes Stadium at 5 p.m.

Rocky Mountain Lacrosse Conference play ended with a bang this weekend, with three of the nation’s top five teams on display at Walker Field in Grand Junction, CO.

In the semi-finals, No. 1 CSU lacrosse rolled over Utah 17-4, and No. 2 CU-Boulder outlasted No. 5 BYU 10-9 in a thriller to set up a rematch of the Rocky Mountain Lacrosse Showdown, which the Rams won 9-3 just two weeks ago.

The second match up of the season between the top two teams in the nation did not disappoint, as the Rams came away with the 9-6 win to take home their 4th RMLC title in as many years. The win also marked the first time in the four-year span that the Rams played the Buffs in the Championship game, not BYU.

“Since I have been here we haven’t played CU in the championship of the conference tournament, so the game was huge,” CSU senior Austin Fisher said. “All the determination to beat the opponent is amplified when it comes down to your biggest rival.”

After a first half dominated by defense, Rams attack Kacy Carter and Sean Smith each fired in a goal with under two minutes to give CSU a 3-1 halftime lead.

“They are going to execute on your weaknesses,” CU defenseman Christian Wilson said. “They work well together, and they don’t make mistakes, which is huge at this point in the season.”

CU came within one in the 3rd quarter when they trailed just 4-3, but the Rams stymied the Buffs hopes with a balanced offensive attack, strong defensive play, and tireless work in the face-off circle from specialist Dan Warfield.

“If there is one thing to highlight about the game, our face-off play by Warfield was incredible,” Fisher said. “His work on the face-offs was a huge difference maker in the game.”

The Rams would not relinquish their late first half lead on their way to their 9th RMLC Championship.

“This one is big, especially for the seniors,” Smith said. “For them to win this four years in a row is pretty special, and our conference is one of the best in the country with BYU and CU in there. You always want to play the best games going into nationals. It’s good to get out there and play our game and execute.”

CSU will now turn their attention to their final goal of the season, defending the national championship.

The Rams will enter the MCLA Tournament as the undisputed number one seed, but that doesn’t mean they are expecting to coast through the tournament.

“We are never satisfied,” said Fisher. “Every win is a means to an end. Winning the conference puts another log on the fire and makes us want it that much more for the national tournament. Our team is peaking at the right time, and we want to be at our best in the post-season. I think that is where we are headed.”