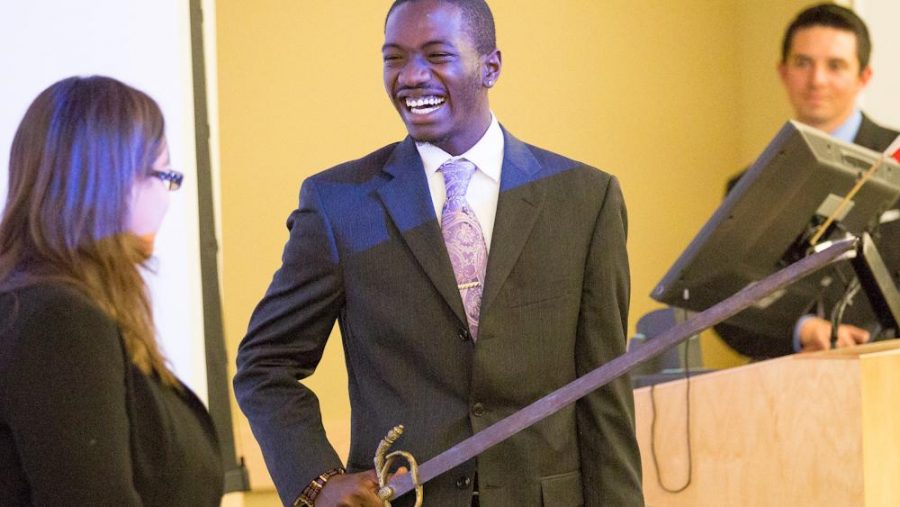 Nigel Daniels and Andrew Olson are sworn in as ASCSU President and Vice President at Senate Wednesday May 8, 2013.

A full house Wednesday night marked the end of the 42nd Senate and the beginning of the 43rd Senate of the Associated Students of CSU.

Nigel Daniels took over as president, and Andrew Olson took over as vice president. Among their tasks in the weeks after winning the election was to compose the executive cabinet for next year.

“I’m confident. I’m excited. I’m thrilled,” Daniels said of the leadership for next year. “I know we are going to see great things come out of this administration.”

Taking a different route than past administrations, Daniels and Olson chose to make their cabinet smaller and go for a more “streamlined” senate.

“We are shrinking the cabinet but paying them better,” said Daniels, in a budget address to the Senate. “We want to make sure we are making their wages competitive and paying them for the work they are doing.”

The duo’s first appointment was senator John Stockley as chief of staff. Stockley ran against Daniels and Olson in the 2013 election, running for vice president. His campaign received 40 percent of the vote.

“I’m really excited for next year,” said Stockley. “I think Nigel is doing a great job really filling up the cabinet with people who aren’t just ‘yes’ men. He’s trying to get people who will challenge what’s going on and I think that will make for a great year.”

Other members of senate approved of Stockley as the Chief of Staff, a position that is the third highest paid in ASCSU, below only the President and vice president.

“At first I was surprised to see John’s name as the Chief of Staff,” said senator Halden Schnal, who was also ratified as an assistant director of governmental affairs. “Then I realized he’s a perfect fit for the job. He’s someone I’ve really looked up to while I’ve been here.”