The Rocky Mountain Collegian • May 2, 2013 • https://collegian.com/articles/news/2013/05/more-dietary-options-for-kosher-and-halal-observing-students-could-be-in-store/ 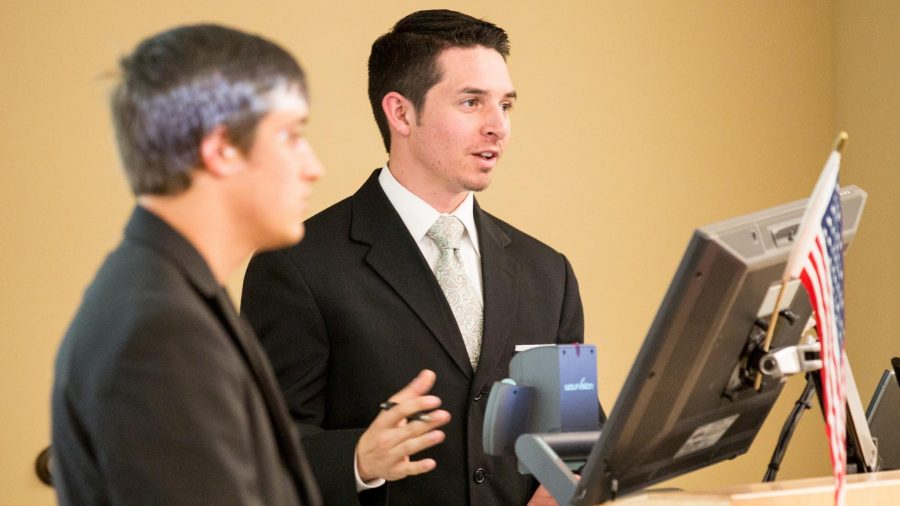 ASCSU Vice President Joe Eden, right, speaks to senate after a resolution to the meal plan was proposed to senate members in the Computer Science building Wednesday night.

More dietary options may be in store for kosher — and halal — observing students either at the Lory Student Center or in student dining halls, due to a new resolution that hit the student Senate floor Wednesday night.

The resolution will urge the university to introduce new options and possibly a “Kosher Kitchen” into a dining hall on campus.

“We think the most feasible option might be to place this in a dining hall, and then have a grab n’ go menu in the LSC with an already packaged lunch,” said Sen. John Stockley, a sponsor of the bill. “There are currently no dining options for this need and we think this is a perfect time to introduce this.”

Many senators, however, did not agree.

“I think this is great, but I think if we are going to make special exceptions for one dietary need I think we need to think it through a little more,” said Lexie Evans, a senator for the Warner College of Natural Resources. “I’m concerned about the feasibility of this.”

Sen. Emily Rudder of the College of Agriculture expressed that placing the kitchen in a dining hall rather than the student center might make it harder to access for students that do not have a meal plan with the university.

“I want to remind everyone that this bill is merely the students of ASCSU calling on Housing and Dining Services to broaden the options for students,” Stockley said. “It’s saying there’s a need … and it needs to be addressed. Overall, this bill is very mild and very appropriate.”

The bill was sent to the External Affairs Committee of the Senate, where it will be discussed and amended for next week’s session.

Bills that were voted on include the addition of a senator mentoring program, a resolution to enforce the current smoking policy, a voter registration ready and a change of job titles in the ASCSU Constitution.

Also voted on was an exemption for RamRide in order for the program to not have its staff members ratified by the Senate. This move, as discussed last week, comes as a push from senate to eventually move the program out from under ASCSU’s oversight.