Classes on sex, beer and rock and roll 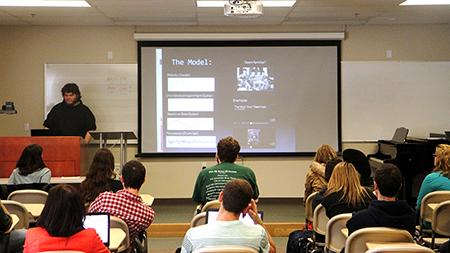 Sex, beer and rock and roll — your Monday, Wednesday, Friday. Sometimes school can be fun.

While it often feels like students spend most of their time struggling through less than invigorating course requirements — CO 150 and STAT may come to mind — Colorado State has a number of unique and mind blowing course offerings.

Here’s a sampling of a few classes that you might actually wake up for.

History of Rock and Roll

Prof. Robert Brewer, who has taught everything from applied tuba to elementary music education, took his love of rock and roll and developed a course that focuses solely on the less conventional musical genre.

“(Rock and roll) is something that I’ve always kept up with and studied anyway, so, I tell my kids, why not get a grade or get paid for it,” Brewer said of fighting to get the course instituted into the university’s music curricula.

MU 333 is a survey course that studies the progression of rock and roll from boogey woogey to 80s hard rock. The course is meant to enlighten students about artists and musical movements that influenced the groups they listen to today, according to Brewer.

“I hope it gives them an opportunity to find out other things that are out there and realize, wow, this was going on before rap!” Brewer said.

This passion for his subject is evident in his lectures, according to Asha Wiegand-Shahani, a liberal arts major taking the course.

“He clearly loves what he talks about,” Wiegand-Shahani said.

Brewer wants students to finish his class with a more open mind towards all music.

“I hope they won’t close their minds to other forms of music that their friends or others who influence them say is uncool. (I hope they learn) to not shut their ears down, but to listen to it for themselves,” Brewer said.

Brewer’s course, which is offered both fall and spring semesters, is constantly evolving. He hopes someday to include live performances in his curriculum.

With Odell’s, New Belgium and many microbreweries located in Fort Collins, it’s only fitting to some that CSU offers a course on how to brew beer. Beer Science and Technology, taught by Prof. Jack Avens, covers the fundamentals of fermentation and production of a quality brew.

“It’s understanding the raw materials and knowing how to combine them to create a well balanced beer,” said Doug Odell, of Odell Brewing Company, about the difficulties involved in brewing.

Odell’s Brewing Company has supported the course since it began five years ago. Odell’s produces the final class recipe, unveils it at a “capping party” for the students and serves the brew at the Ramskeller, according to Odell.

“We hope there’s a lot of continued give and take between the local breweries and CSU,” Odell said opportunity for students in the brewing industry. “Craft brewing is growing at such a fast pace that brewers are really having a hard time finding qualified people.”

If you’re interested in taking FTEC 460, you better plan ahead. The course requires students to have taken organic chemistry, and, even though the course recently expanded to fall and spring offerings, there is always a waiting list.

CSU even offers enology — or the study of wine — courses for the more sophisticated college student. A horticulture class taught by Prof. Steve Menke introduces participants to the proper techniques used to taste and appreciate wine.

“The class is kind of the science of wine tasting,” Menke said.

The professor first teaches students how their senses function and then applies the concepts to descriptive smell and taste tests of wine.

“The enology classes definitely provide an education, and increase confidence in wine selection with respect to taste and quality,” said Paul Rupp, a horticulture major focusing on wine production. “I would encourage anyone interested in expanding their ‘sommelier’ capabilities, or who just like wine (to register for the course).”

Both courses require students to be over 21.

Prof. Larry Bloom has been teaching The Psychology of Human Sexuality for the past 38 years. He developed the course in order to educate students about the psychology and biology of human sexuality.

“I hope students are able to have more sound knowledge about human sexuality, be able to separate reality from fantasy regarding the topic, be more at ease in thinking about the topic and discussing it, and take the information learned in the class with them in a lasting way in their lives,” Bloom said.

Chelsea Pitonyak, an equine science senior, is one of many non-majors taking PSY 228 this semester. She enjoys listening to the guest speakers Bloom brings in and all of the data he presents in order to change student’s perceptions of sexuality.

“All the statistics he gives us are surprising and not what you would expect,” Pitonyak said.

This past Thursday, Professor Bloom began his lecture on “Psychology and The Art of Kissing” with a video describing the proper steps to kiss passionately, and asked students to share their most “yucky, turn-off kind of kiss” experiences.

“Audience participation is a crucial part of the class. I like to go out into the audience and get people’s thoughts who are willing to share,” Bloom said.

While the course covers a touchy subject, Bloom manages to cover content in a professional manner.

“He does a really good job of presenting the material in a way that doesn’t upset anyone,” Pitonyak said of Bloom’s teaching style.

Bloom is retiring this year, but he plans to continue teaching PSY 228 for the next several years.