The Rocky Mountain Collegian • May 1, 2013 • https://collegian.com/articles/news/2013/05/april-snowstorms-boost-colorado-rafting-industry/ 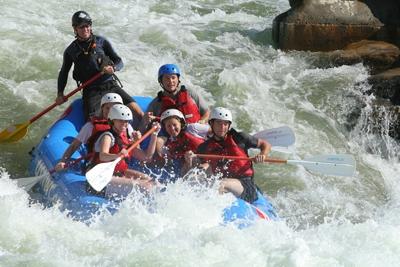 While some people may be excited when the snow melts and summer nears, those in the whitewater rafting industry are hoping the snow sticks around awhile longer.

Early snow melt could mean a shorter rafting season in Colorado as high water levels in May turn to lower water levels by late July — but Coloradans know the weather here is fickle. For whitewater rafting companies, that means preparing for the season just as they would any other year.

“We just prepare I guess, just like it’s gonna be a normal year because you just never know what the weather is going to do,” said Bob Klein, manager of the rafting company A Wanderlust Adventure in Laporte.  “So we prepare like we’re going to take a normal amount of people down the river — which is usually between 7,000 to 8,000 people — and then we just see what the weather does.”

Last summer’s drought, along with the fires, caused a drop in the number of people rafting Colorado rivers. Rafting companies on the Poudre River were forced to suspend operations during that time — something that Klein had never experienced in his 21 years in the rafting industry.

“During the fire there wasn’t anything we could do except wait for three weeks until they got the fire under control,” Klein said.

He estimates business at A Wanderlust Adventure was down nearly 40 percent last summer.

A 2012 year-end report by the Colorado River Outfitters Association reported that Colorado’s whitewater rafting industry took a “solid hit in 2012 with overall user days down 17.1 percent over 2011.” According to the report, this was the largest hit the industry took since tracking began in 1990. The largest decline came in 2002, a major drought year for Colorado. The report attributes the lower numbers to the high drought and fire conditions that consumed much of the state last summer.

Before April, the outlook on the rafting season was looking grim.

“It was looking like last year,” said David Costlow, executive director of CROA.

Costlow said the snow that Colorado received this year in April will have a “tremendous impact” on the rafting industry in the state. Snow impact is reaching close to 100 percent normal in some areas, according to Costlow.

This year is looking much like the 2010 season in which water levels were normal, Costlow said, and visitors are making plans.

Klein said A Wanderlust Adventure has already booked nearly 2,000 people for rafting trips this summer and hopes to book even more before the start of the season. Booking 2,000 to 3,000 people before the season begins is normal for the company, according to Klein.

“When it snows, it makes people call more,” Costlow said. “It’s kind of like skiing, ya know. You probably don’t book your ski trip until you see a lot of snow; same for rafting.”

But some people believe — weather conditions aside — that whitewater rafting is a declining industry.

“I think the boom was in like the 70s or 80s maybe even the 90s,” said Robin Davenport, a senior horticulture major who has worked at rafting companies in both Idaho and Colorado. “I think people are doing other stuff for vacations now (other) than rafting, which is really sad to see.”

Davenport said she thinks the younger generation is not as into rafting as some of the older generations. “It might be the pricing that high end rafting is doing, but I’m not entirely sure,” she said.

“There are a couple of reasons for that and one’s the economy,” he said. “Families sometimes cut back on vacations to save money.”

According to Costlow, commercial rafting brought $151 million to the state in 2011.

“I think if people are thinking of going rafting, this is the year to go because the water is looking good overall,” Costlow said.