After hours: a look at campus after dark 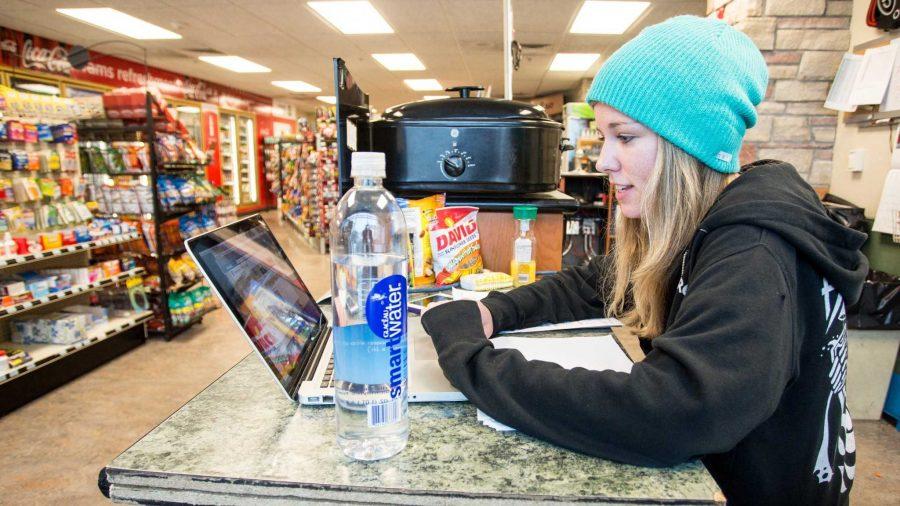 Wednesday evening after most students have left the campus, senior Cam's employee Laura Barrett sorts through applications for possible employees next year. Most students don't see what campus is like after classes are out, but there is still plenty of activity that goes on.

It’s 8:40 p.m. at Cam’s Corner Store in the Lory Student Center and Joanna Johnson, a senior nutrition and food science major, and Peter Jadovich, a senior environmental communications major, are waiting for the shop to close.

“There’s a couple interesting older folks that have kind of run the mill in Fort Collins,” Jadovich said. “A banjo guy came in and played us a tune one time.”

But during the lowest part of the day from 6 to 9 p.m., Johnson and Jadovich keep themselves entertained by stocking shelves, playing games and watching shows on their laptops.

“I don’t have a car, so I bike and walk through campus,” Jadovich said. “It’s really peaceful and I kind of like it.”

Continuing through campus, a few teams play chess in the food court as lingering students make their way to the bus and janitors wipe away the grime of the day.

With the stress of the crowds gone, a mix of rain and silence highlights little details that are sure to go unnoticed during the day, like a silver sticker on the door of Clark A that reads “you are beautiful,” or the tiny sculptures made of gears and tools in the Behavioral Sciences Building.

It’s 9:30 p.m. and a few graduate students are stretching their legs in Clark A.

“We stay here working until 11 or 12 every night,” said Naomi Gerakios, a graduate history student.

Gerakios and Annie Barone, also a history grad student, were strolling around Clark A for a research break.

“We usually go outside, but tonight it’s raining,” Barone said. “We see maybe half a dozen people regularly, but our office is a concrete closet so we see less than an average student would.”

For the two grad students, staying on campus is more productive than going home.

“I just like having somewhere to keep all my work and research,” Gerakios said.

“The sheer number of books we have to carry are daunting,” Barone added.

But perhaps the most interesting students that a studious soul would find on campus late at night are Tommy Peters, a senior forestry major, and Ike Rumba, a senior natural resources and tourism major.

“We just watched Chasing Ice, a documentary about the receding ice caps,” Peters said. “We’re both really passionate about the environment and it’s also our topic of study.”

According to Rumba, it was one of the best documentaries he has seen.

Amongst the studious and seriously environmentally informed outer layer to these students lies a rebellious side.

“Actually last night, I was taking a run around the Oval at midnight and I saw a few fire trucks and police cars at the math building,” Rumba said. “And I just got this feeling that I needed to go streaking. So I dropped my drawers, hid behind a tree as I waited for a car to pass and just ran behind all of these police officers who were looking up at the building and had no idea.”

Student Life Beat and Entertainment Reporter Bailey Constas can be reached at news@collegian.com.