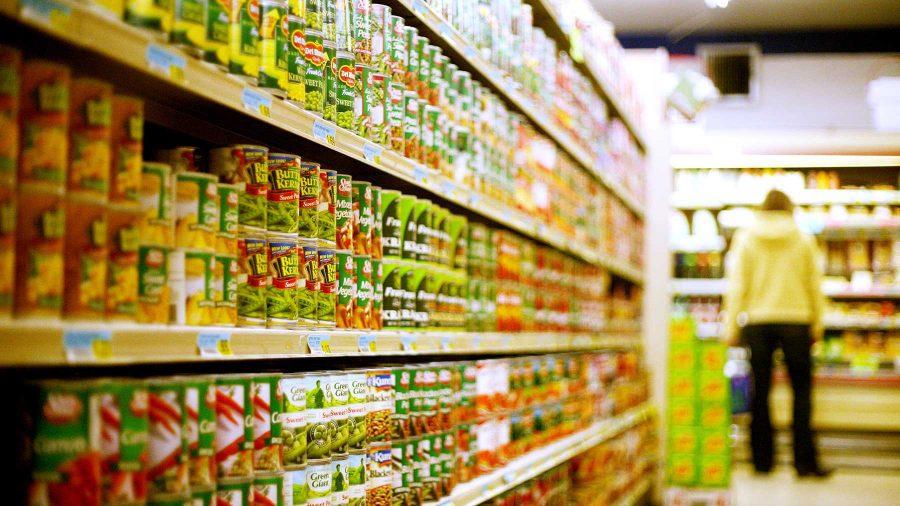 Fully stocked shelves of food from the Beavers Market. Some college campuses are implimenting food pantries where students in high need can pick up donated food items for free.

What began as a kind gesture around the holiday season grew into a nationwide phenomenon.

Smith-Tyge said the group of graduate students recognized there was a need on campus for helping students with food insecurity more than just once a year. In 1993, the group helped establish the first student food bank in the nation at MSU.

More colleges across the nation have begun to recognize and address food insecurity on campus.

Smith-Tyge said he generally averages one to two calls per week from other colleges asking how to set up a student food bank or pantry. He estimates there are now more than 100 campuses with student food banks in the U.S.

Becca Seul, academic advisor and manager of the food pantry at Middle Tennessee State University, said she noticed that more students were applying for financial aid because they were homeless and in need of assistance. The advising center and the student government association decided to become partners in creating a food pantry on campus that opened in October 2012.

Seul said they had to work quickly because “the need grew faster than we could grow the pantry.”

With the help of the community, student organizations and local news stations invited to campus to help promote the food pantry during, Seul said they have been able to sustain the pantry and have served more than 200 students since opening.

In the 20 years that the MSU Food Bank has been open, Smith-Tyge said the food bank typically serves about 4,000 students a year. The number of student peaked at 6,000 during the 2008-2009 school year with the recession “that especially hit Michigan hard,” he said.

With the support of the MSU and East Lansing communities, Smith-Tyge said they have been able to keep the pantry well stocked.

“We’ve never had to turn anyone away because we ran out of food,” he said.

Students in need at MSU are qualified to use the food bank as long as they present a valid student I.D. and are not using a campus meal plan. There is no restriction on the amount of times they can visit the food bank.

“Students are able to come to as many distributions as they want,” Smith-Tyge said. “We don’t really limit that.”

Lindon Belshe, director of governmental affairs at the Associated Students of CSU said a student food pantry has been in discussion for a number of years among ASCSU Senators, although a formal proposal has not yet been introduced.

“Now the reason as I understand it, it has never actually come into play — never actually come to fruition — is the fact that (administration) feels like there might not be a huge demand for it on campus simply because we obviously have the (Larimer County Food Bank) and we also have Cans Around the Oval in which case all the food goes to that,” Belshe said, adding that he could see a student food pantry at CSU in the future, though.

Pam Norris, director of the Student Leadership, Involvement and Community Engagement office at CSU said they have not had any students approach the office about setting up a student food pantry, but would be happy to sit down with any student wanting to explore the possibilities.

The explosion in the interest of food banks in the country has led to the creation of the College and University Food Bank Alliance, Smith-Tyge said. The national alliance allows the movement to grow and gives people a chance to share tips, resources, best practices and ideas to continue to serve students all over the country.

“We hear all the time from our clients about how the food bank has allowed them to, you know, take that extra class so they can graduate on time or not have to worry as much about working as many hours … and still have time to spend time with their family and do their homework and attend classes,” Smith-Tyge said. “There’s some good work that’s being done in a lot of different places now in terms of addressing student food insecurity.”