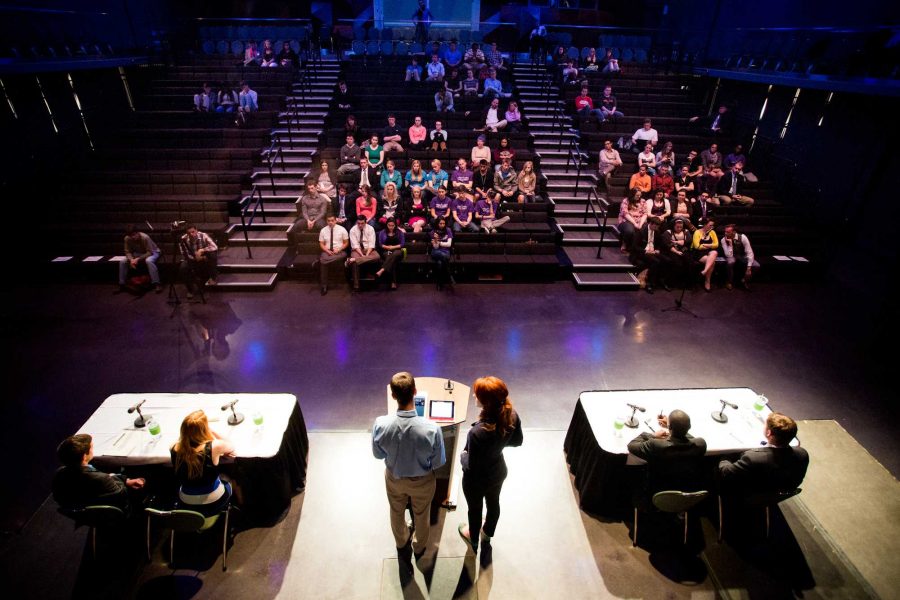 Approximately 50 people — most of them ASCSU representatives — showed up to watch the candidates discuss topics ranging from RamRide to how student fee money is accounted for.

The debate was moderated by the Collegian and CTV with questions initially posed by those representatives, followed by open questions from the audience.

Both campaigns agreed one of the biggest challenges facing both ASCSU and the student body next year is the closing of the LSC for renovations.

They differed, however, on how to keep morale high when the LSC is shut down and the departments housed there are moved to the Mac Gym in the rec center.

“We have to have a presence throughout the move, a presence at Ram Welcome…” Daniels said. “We want to come in with a new drive and redefine how students look at the Lory Student Center.”

Bowling said she wants to keep Ramskeller open during the move and have someone in the RamRide office that would act as a liaison to the relocated offices in the Mac Gym.

The dialogue between candidates remained cordial, with each side taking about five minutes to answer each question. The debate lasted approximately 90 minutes.

Cashel Cain, a senior psychology major and one of the only non-student government students in attendance, said she came to the debate to get a better understanding of what the candidates were about, besides flyers and signs around campus.

“Both campaigns had good points and I liked that they weren’t completely opposed on everything,” Cain said.

As one of the most visible aspects of ASCSU, RamRide, is also a major component of both candidates platforms. Both campaigns have budgeted for improvements in the program next year.

A new dispatch system is also being implemented that will decrease wait times and improve efficiency.

“We’re dedicated to making RamRide our number one priority when we walk into office,” Bowling said.

Daniels said “RamRide is facing a ton of different challenges” and believed that volunteer culture of RamRide needs to be a primary focus for improvement.

“We want people to come volunteer for RamRide,” Daniels said. “RamRide shouldn’t be having to go search for people to volunteer.”

When asked what their most important platform was, Bowling said it was “fiscal sustainability and RamRide,” noting that prior ASCSU budgets spent more money then they took in. Her running mate John Stockley agreed and said his most important issue is fiscal responsibility.

“Dealing with other people’s money is a huge responsibility,” Stockley said.

Building on his campaign motto of “Bridging the Gap,” Daniels said having liaisons on campus that would gather student voices and input to make sure all voices are heard is of the utmost importance.

His running mate, Andrew Olson, said his priority is creating an interactive student fee platform where students can easily get online and find out exactly where, and how the $886 in yearly fee money is being spent.

As a member of the Student Fee Review Board, Olson said most members can’t keep track of how fee money is being spent.

Senior biology and psychology double major Robert Harris said he attended the debate in order to make sure he better understood the people who might be representing him in the future.

He said he liked hearing the details about the renovations underway at the LSC and said the debate helped solidify which candidate he would vote for. He also said each campaign brought forth good ideas on how to face next year’s challenges.

“I liked how both campaigns want to do more outreach to students outside of ASCSU,” Roberts said.