One day as a ‘homeless’ woman in Fort Collins 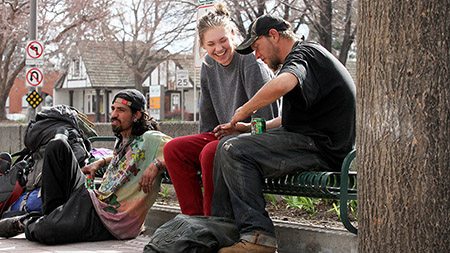 Curiosity got the best of me Friday afternoon when a colleague and I put on thrift shop clothing, stuffed old backpacks and meandered around Old Town pretending to be homeless.  The goal of our jaunt was to see people’s reactions from a perspective it is probably safe to say many college students have not experienced.

Matt and I were acting as two kids trying to find our way back from Omaha to Denver, out of money and sleeping wherever.

The initial diverse glances I was given while walking past people on College Avenue were new to me.  As an 18-year-old girl, I do not often go out without a trace of makeup on my face, let alone not showering for a few days.

It was not until after smoking my very first cigarette and hearing Matt get denied a few times, that I felt ready to ask people myself for money for a bus fair.

So, I mustered up barely enough courage and chose a middle-aged couple idly walking around nearby. In a high-pitched, forced voice I had never even heard before, I politely inquired for some spare change. The woman’s response was a firm “no,” while the man shook his head and laughed, leaving me flustered and unsure of what to do with my suddenly very heavy limbs.

A few requests later, we rounded a corner and were about to pass a lone woman of about 25 years of age.  She took one look at Matt and me, only to whip her head the opposite direction — thus ignoring my three “excuse me’s,” and disregarding my existence.

To be diminished and ignored by another human being in such a way definitely took a toll on me.

All she knew of me was my appearance. I was still the same person as I am on any other day, yet this lady refused to even look at me.

We decided at the beginning of the day to donate all of the money we received from people off the street. In total, we probably approached 15 people for money, but only one man, with a handlebar mustache, gave me 75 cents.

I have often been on the other side of the spectrum, gazing at people who were struggling on the streets, and feeling guilty for not helping them.  I could tell every well-dressed person felt uncomfortable with my presence, while I could not look anyone in the eye because of my own shame.

To make things clear, I am not attempting in any way to report on how people that are actually homeless may feel. I am simply recording people’s reactions to my own appearance and interactions with them.  I cannot imagine the suffering a person must go through in such a desperate situation as homelessness.

After meandering throughout Old town for an hour or so, Matt and I got in touch with our photographer, who was going to shoot our escapade. Kevin told us to meet him on a bench south of where we were, with two men who were homeless that he had been getting to know.

When we arrived at the bench, we met for the first time Kevin, Beer and Fish Taco. Immediately, Fish Taco and Beer informed us that Kevin was a reporter for a newspaper, and he had been sitting with them, observing their panhandling efforts.

As we began talking, I tried to ask most of the questions rather than vice versa. Fish Taco and Beer, though they had little, offered us socks, chips, tootsie rolls, beer and a plethora of advice.

They taught Matt and I how to jump on a freight train and, after asking if we enjoyed sleeping in the freezing cold, never having enough to eat, and asking for money, they told us to “go home to mama” if that was possible.

They said to never become a “home-guard” and to travel, because that is what makes life worth it.  Beer told me that his favorite place was Australia — he had served there in the military.

From us, they quickly learned that Matt was not, in fact, my road dog (pimp), and they couldn’t quite understand why I was with someone who seemed so “green” or inexperienced.

We also got our fare share of bullet-wound and tattoo viewings that day.

Fish Taco told us that he got his name because he was so drunk one night that he tattooed “F I S H T A C O” on his individual fingers.  He could not figure out why the next few days people kept calling him that, until he wiped the soot off his fingers to reveal his new identity.

It was not until after all of these stories that I realized for certain that Kevin did not know who we were — he hadn’t taken one picture of us for well over the hour we were sitting there.  I was glad of the fact that we were not obvious fakes, but the fact that all three of these men had no idea really solidified something for me.

I must admit, I wanted to tell Fish Taco and Beer the truth, but something was holding me back. Even though I was pretending to be a girl who had nothing, I was still acting like myself around these people. The fact that my squeaky voice went away and that I could have the same sense of humor and the same values did not make me feel like an actor anymore.

It is here that I realized something that I have already comprehended in many different ways and will probably never stop realizing over and over. All of the things that make me who I am have nothing to do with my personal belongings, and everything to do with who I am on the inside.  Fish Taco and Beer are people on the inside, even though sometimes they are treated with less humanity than they deserve.