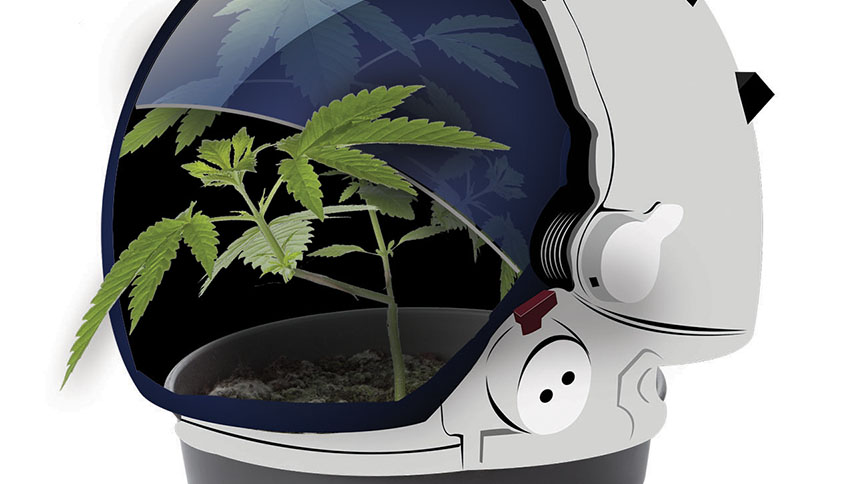 It started on the forbidding terrain of Mars and is ending in the marijuana grow rooms of Colorado.
“The classes have been overwhelming, in that most everything that goes on in that class is knowledge you cannot find anywhere else,” Chamberlain said.

Operating out of Loveland, Dale Chamberlain — who received a Bachelor’s of Science from CSU in 1993 and holds a Master’s in Aerospace Engineering from CU-Boulder — has taken the same scientific rigor he used to study advanced life support systems for future colonies on lunar and Martian environments, and applied it to creating a self-contained hydroponic chamber system for the “do-it-yourself” marijuana grower in Colorado.

“Now that it is legal to possess and grow your own cannabis in Colorado, one now can legally design a chamber around the growing of cannabis,” Chamberlain said.

He designed and built the Colorado Grow Box with the average grower in mind, someone who probably doesn’t have the time to dedicate to a complex, time consuming marijuana grow operation.

In compliance with state law, which mandates grow spaces have to be an enclosed, lockable space, the Colorado Grow Box is a lockable, self-contained system that, once up and running, requires little maintenance to produce consistent yields of marijuana.

“The bottom line is people don’t have time, they don’t have time because of a job and other things to deal with,” Chamberlain said. “With my background with plant chambered automation systems, it is a natural conclusion to build a chamber that would be like a refrigerator, where all you need to do is go and open the door and get your bud.”

“You worry about it once a week, maybe,” he added.

After working at the Kennedy Space Center in Florida in the 1990s, he landed a job as a bio-system engineer for a private space technology firm in Boulder, and helped construct a plant growth chamber that was used on the space shuttle.

Although the the career track from the world of NASA scientist to pot growing expert may seem unorthodox, Chamberlain said it’s a natural extension of a lifelong passion and fascination with astronauts, space exploration and plant growth.

Ever since elementary school “I always thought ‘Well, astronauts are gonna need some kind of food, and so I’ve always been inclined to deal with, like, aquariums, terrariums and greenhouses,” Chamberlain said.

The grow box isn’t the only mark Chamberlain is making on the burgeoning marijuana industry in Colorado.

After years spent as a consultant for private and industrial medical marijuana growers in Colorado, Chamberlain decided to use his expertise to start a marijuana growing school with his cousin Chuck.

Students attending the High Altitude School of Hydroponics (HASH) can choose from three levels of classes designed for the casual grower all the way up to a graduate studies class that teaches advanced concepts like genetics and physiology of marijuana plants.

With such a wide variety of information — some more reliable than others — about marijuana growing available to the public, Chamberlain said he wanted to eliminate confusion and provide people with scientifically sound procedures to have successful grow operations that operate within state law.

“The classes have been overwhelming, in that most everything that goes on in that class is knowledge you cannot find anywhere else,” Chamberlain said. “You go search the web, get on YouTube and everyone will tell you all these great ways of doing stuff. Well, yeah, not all of them are correct.”

Demand has been so high the classes at HASH have sold out and private consultations with growers are increasingly taking up what little free time Chamberlain has. Up next for HASH is a video to reach customers who can’t attend classes.

When talking about medical marijuana and legalization in Colorado, Chamberlain’s passion for the plant, and what it means for society, cannot be overstated.

He said it’s an exciting moment in our country’s history, and to be a part of the first wave of entrepreneurs paving the way for others is literally a once-in-a-lifetime opportunity.

“I really feel that the historic nature of this will be a benefit to not only the state, but the nation as a whole, because … I feel this personally, this is a very personal thing with me,” Chamberlain said. “In that the Cheech and Chong attitude towards marijuana must disappear.”