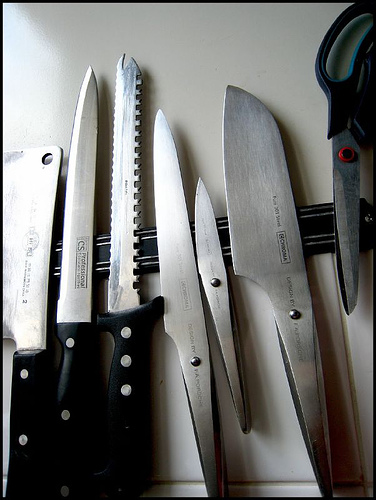 When cases of intended or actual violence occur on campus, some students may feel safer and more secure having their own weapon on hand.

Over the past 15 years at CSU, there have been a total of seven knife threats and one case of intent to use, as opposed to one gun threat and one actual use, according to Dell Rae Moellenberg, CSU Police Department public information liaison. With a significant focus recently centered on gun laws in Colorado, Sgt. Adam Smith commented on the presence of knife carriers on campus.

“I have been a police officer for over fifteen years, and have seen more cases involving knives than I could ever remember,” Smith said.

In Colorado, carrying a concealed knife with a blade longer than 3.5 inches is unlawful in most circumstances, unless it is for immediate use in a hunting, fishing or sporting capacity. CSU in particular restricts possession of any firearm, other weapon or “reasonable facsimile” in the dining and residence halls.

“A blade longer than (3.5 inches) has greater cutting ability, greater penetration if stabbed and it can be leveraged more effectively as a weapon,” Smith said.

People carry knives for a multitude of reasons, legal and illegal. Many possess knives, pepper spray and guns for reasons of self-defense, Smith said.

“We want to just create and enforce a safe community.  If a student is carrying a deadly weapon for self-defense, then that’s totally up to them and the responsibility is theirs to know the law and what the legal, ethical and moral obligations are to that end,” Smith said.

Freshman business major Connor Keenum, however, owns his knife for the sole purpose of convenience.  Keenum said he rarely brings it anywhere with him.

“To be honest I mostly just use it for opening packages I get in the mail. I’ve never really thought about using it for self defense,” Keenum said.