CAM The Ram ‘handlers’ discuss their involvement at CSU events 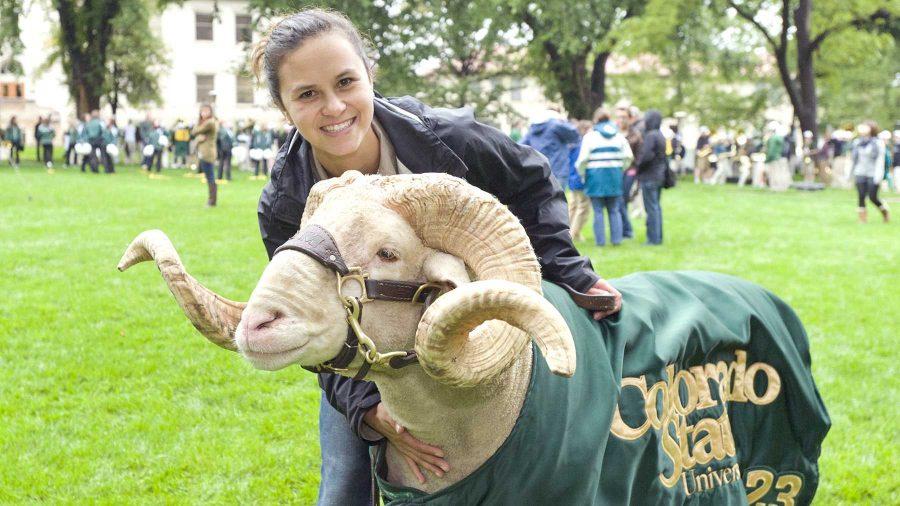 Cam the Ram handler and Animal Science major Sarah Short poses with Cam before a Colorado State University Fall Address. Cam's handlers are employed by the CSU Alumni Association and often work the job throughout their entire college career.

While accompanying the beloved school mascot, CAM the Ram, to an event a few months ago, junior agricultural education major Shelby McCracken was asked a puzzling question: “How did you get those horns onto that dog?”

McCracken and a few other students share the job of taking everyone’s favorite ram to and from events after first washing and shearing him. They makes sure he looks his best and then go out to events and answer all kinds questions about CAM, themselves and CSU.

“We’ll get an e-mail of an event request and one of us will volunteer. We make sure he’s ready to go and after that we load him up in the trailer, put on his halter and go to the event,” he said.

These “handlers” are hired by the CSU Alumni Association and given the job for the duration of their time at CSU. Most of them have hopes of securing a career involving animals.

“I was raised on a horse ranch and that’s kind of what drew me to CAM. I missed the farm,” McCracken said.

Senior animal science major Sarah Short was hired as a freshman and said she wanted to become a handler for similar reasons.

“I’ve always been involved in cattle and I was looking for things to do to get involved as a freshman. This came up and I decided to apply,” she said.

The handlers take turns escorting CAM to events, but they also each sign up for a week once or twice a semester in which they are responsible for caring for him every day.

“That job means feeding him every morning and night, checking his water, and then at the end of every week cleaning out his pen,” McCracken said.

According to Short, in addition to looking after CAM the handlers also work as ambassadors for the university.

McCracken added that he enjoys seeing the reactions people have to CAM.

“The best part is going to events and seeing people’s faces who have never seen CAM before or really have never seen any farm animal up close before. It’s really rewarding to get to educate them not only about CSU but also CAM the Ram himself,” he said.

Both Short and McCracken said they especially enjoy conversing with people at events, taking pictures of people with CAM and seeing how happy he makes them.