Greek Week expected to be a success with polar bears, Disney and chariots 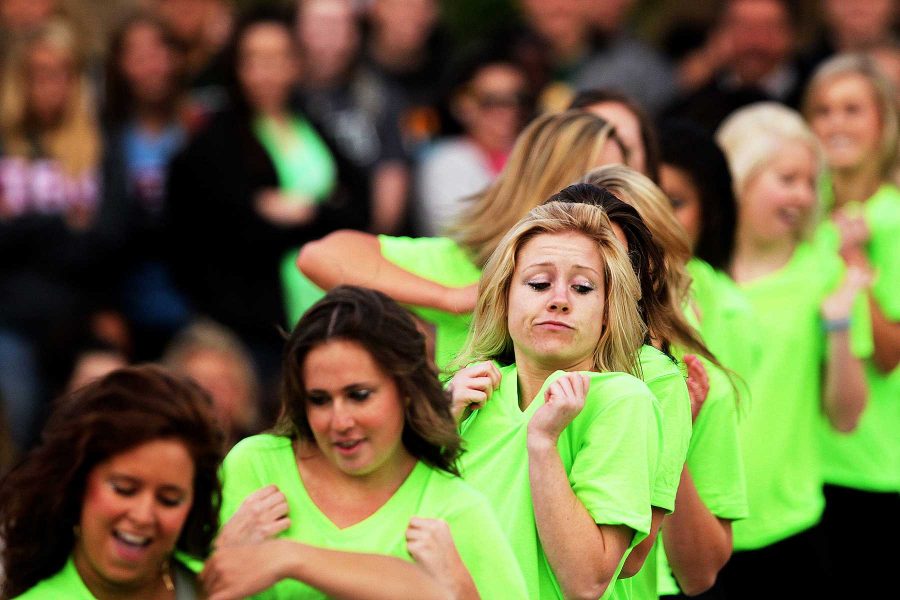 Kaylarae Griffith from Zeta Tau Alpha dances at the Stroll during Greek Week on the Plaza last year. This year's Disney themed week will feature a "Polar Bear Plundge".

It’s called “Loony Dook” in the United Kingdom. People come out on New Years day in the freezing cold and submerge themselves into an open body of freezing water.

And in the land of the free and home of the brave, it’s called a “Polar Bear Plunge,” and that’s how the Greek’s on campus are beginning their Greek Week.

Greek Week is an annual celebration that fraternities and sororities across the nation celebrate to create Greek unity and to showcase their communal efforts.

“We wanted to do something the Greek community hasn’t done before,” said Emma Lanham, Panhellenic Vice President of Community Programming.

For the Polar Bear Plunge, the sororities and fraternities will stay in the water as cold as long as possible to raise money for the Poudre Fire Authority and the Larimer County Diving Team.

For the week, the entire Greek life is divided into seven teams, which this year are Disney-themed and work with their teams to gain points throughout the week to win awards at Saturday’s Greek’s Night Out.

According to Amy Bell, Greek Life Coordinator and Panhellenic Advisor, the events for the week will go as follows:

Monday is a lip sync competition at the Lincoln Center.

“The teams put together a big extravagant 12 minute dance,”Lanham said. “We have judges from all over CSU including… Dawn Burton the CSU cheer team coach.”

Tuesday is Make Your Mark on the Plaza, where the seven teams are required to draw in a square of the Plaza representing their houses as well as their team theme. A volleyball tournament also takes place that same day.

Wednesday, a program called “Can I Kiss You?” will focus on a sexual awareness and consent –– an event that the general public is encouraged to attend at the Lincoln Center at 7 p.m.

“We get feedback from the university and one of their main concern is sexual awareness within the college community in general,” said Ajay Romero, Multicultural Greek Council Vice President of Greek Council Affairs. “We try to let sudents know that they’re aware and how important [knowing what consent] is.”

Thursday, chariot races will be held in the front of Greek houses, sponsored by Red Bull.

“We race chariots with a member, generally the smallest person we have, so you can go as fast as possible right outside of Zeta and Pi Kappa Pi,” Lanham said.

And Friday is a stroll off, which is stomping –– something that the groups have worked on for weeks.

“Being able to reach out to traditional and to let them know what we do, the strolling is a part of our culture it’s not just for fun and it’s pretty fun to explain that to them,” Romero said.

For Romero, Greek Week is more than just fun events. It’s a time to break stereotypes and help the community.

“Greek Life is something more than social activities. The bond we share within ourselves, the sisterhood and brotherhood is very strong. And when you’re able to expand that to an entire community, it’s a great opportunity,” Romero said.

Romero calls Pi Lambda Chi her home and owes her succes in college to her sorority.

“I came from Denver and you need a sense of smaller community and understanding of where we come from. Coming from the Denver Public Schools, the education level is a lot lower and so that support is much needed. Pi Lambda Chi is my home away from home.”

Being just a sophomore and being able to step up in a position when I just crossed last spring of 2012, my sisters really supported me. If I wasn’t in a sorority, college would be a lot harder for me,” Romero said.

For Lanham, Greek Week is a time for her to reach out to other areas of Greek life that she wouldn’t have normally been in contact with.

The week is also important to her is to bring awareness to the community about the good that Greeks do.

“We want our community members to know to look beyond the red cup and see other things we do on campus,” Lanham said. “We have fun, we have sober fun, we are doing positive things for our community, service, working on grades.”

Study hours are held during Greek Week for the members to gain points in hopes for awards at the end of the week. Clark C and the fraternity and sorority houses have a room dedicated to these special times.

And according to Romero, the week is completely alcohol-free, or is at least very discouraged.

Compared to other years Romero, thinks that this year they were able to reach out to community members better.

“Our staff and student workers and governing board are very bright students and share the same dreams and goals. We just have to keep on working on the sturcture of everything and ambitions of how Greek Life needs to be,” Romero said. “It takes time, it takes years to develop that goal. But every year we do make improvements which is better than not making improvements and we continue going forward.”

Student Life and Entertainment Reporter (@BaileyLiza) can be reached at news@collegian.com.