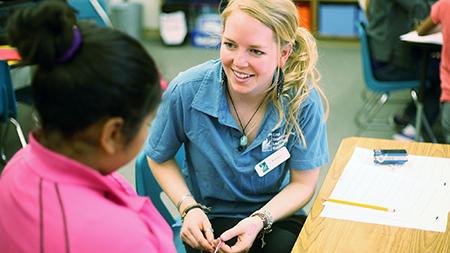 According to the National Science Foundation, in 2009, 10.7 percent of engineers were women and 24.8 percent of mathematical or computer scientists were female.

In response to this blatent underrepresentation of women in mathematical and scietific fields, the Environmental Learning Center — an educational outreach program housed by the Warner College of Natural Resources — created an after school program called Girls Advancing Scientific Progress, or GASP!

“It was really excellent for this program to be recognized, it’s a very grassroots kind of start for this very homegrown program,” said Kristen Dean, program coordinator for ELC.

The program started in 2009 when a student working on her dissertation found the overwhelming disproportionate community of women in the science fields.

“The award was a recognition of what we at the ELC and the girls in particular know — that  this is an excellent program,” Dean said.

The program targets girls in third through fifth grade for six to seven weeks, once a week, a time in education when teachers start diverging into stereotypes, according to Meyghan Mahoney, junior natural resource recreation and tourism environmental communications major and lead GASP! instructor.

“For girls it’s really critical about fourth grade to get involved in science. That’s when they start understanding the connectiveness of their classes,” Mahoney said. “It’s also when, whether it’s conscious or not, teachers start choosing male students to answer the math and science questions, and girls to answer the english and social studies questions.”

Mahoney’s favorite part of being involved in the program is being able to see the progress of the students.

“I love seeing how the girls change in confidence.  We get girls who are absolutley quiet and don’t want to say a word the first two weeks, and then they’re the ones who are jumping up and presenting data,” Mahoney said.

Adele Vrooman, sophomore biology major with a concentration in anatomny and physiology and GASP! teacher, thinks one of the most important parts about the program is defining what science is.

“We teach them wildlife biology, entomology and the scientific method. We want them to get what careers in science are, a lot of the times they have no idea that a doctor is a scientist,” Vrooman said. “We want to introduce that science is everywhere.”

Vrooman always considered herself adventurous and found a teacher in elementary school who was excited about science, and passed on that drive to Vrooman.

The program also has three sister programs in Cape Verde, Panama and Kenya.

“There are similar programs happening in these countries, focused on getting girls interested in science. We talk back and forth with these countries and send letters, bracelets, jewelry, etc.,” Dean said. “This cultural exchange is an important piece of GASP! and the girls are always very excited about learning that girls in other countries are learning the same things they are.”

“One of the things that was uncovered in the research is that students, in particular the girls, that have support of families are more likely to continue educations if they feel their family supports them in science,” Dean said.

As of right now the program works with three elementary schools including Linton Elementary, Harris Elementary and Big Thompson Elementary.

In the future, Dean hopes to work to stregthen connection between families, schools and countries.

“We’re really trying to harness that family support of girls learning and their commitment to sceince,” Dean said.

Collegian Writer Bailey Constas can be reached at news@collegian.com.