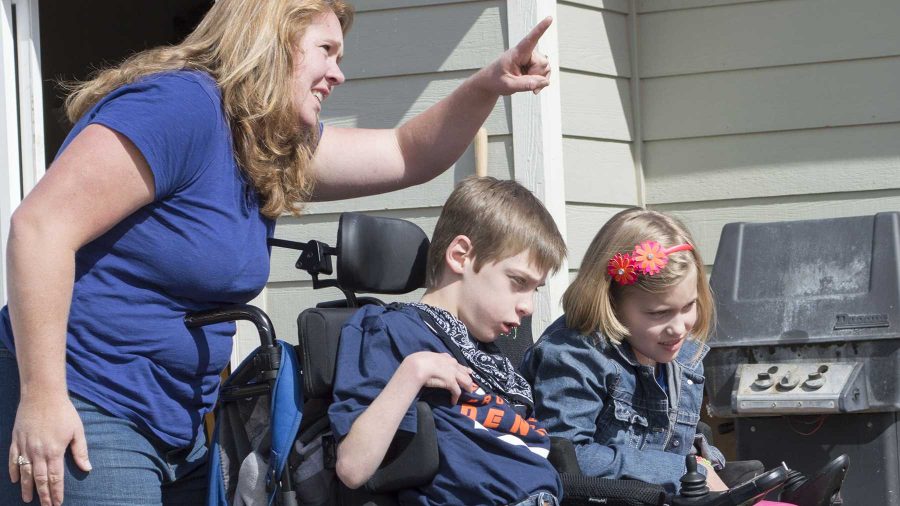 Katie Waechter, left, talks to her twin 11-year-old children James, middle, and Libby as they watch a specially made 3000 pound swing be hosted into their backyard. Libby and James both have cerebral palsy and were gifted the custom made swing by CM Cares, a project in The Department of Construction Management .

Thursday morning, two 11-year-olds watched as their new toy — a 3,000 pound swing — was lifted into their backyard by a 3-ton crane.

The swing was made specially for James and Libby Waechter by CM Cares, a project in The Department of Construction Management.

The twins both have cerebral palsy, which limits them to wheelchairs. Before the project, this prevented them from going outside in their own backyard.

“My friends and I can go outside now,” Libby Waechter said. “(The construction team members) are really cool because what they did for us.”

“They now have a level of freedom,” said Katie Waechter, mother of the twins. “They can get in and out whenever they want.”

Kyle Snow, project manager of the James and Libby Project, began the project with the idea of the swing, which quickly turned into an entire redo of their backyard.

“We designed and built a full-sized deck right off their back door. We also built a large wheelchair swing that’s the first of it’s kind,” Snow said. “We installed a brand new door with an automatic opener … and grab bars in the shower.”

The grab bars in the shower helped Libby take a shower  by herself for the first time in her life last week.

A bidet toilet with automatic cleaning and drying will also be installed to help their mother as the children grow older, along with a raised handicapped accessible sandbox.

“We’ve been up there every Saturday through the semester working on the deck and building,” Snow said.

The project is fully funded through donations the students in the class have to find, as well as plan, design, build and install. Sponsors include ISEC and GE Johnson Construction.

“We’ve had a lot of success, and a lot of companies have stepped up. They’ve even sent up skilled carpenters from Denver to help,” Snow said.

“It’s been great having them all here on the weekends. They’re all extremely polite,” Katie Waechter said. “It was so fun to watch because at first they were really quiet, and now they’re all just building and comfortable.”

This is the second year for the CM Cares project which Mostafa Khattab, the Department head, explains is the only program like this taking place in the country.

“It was initiated because it is critical for students’ education to provide them with a different class element by being in the community and having hands-on experience,” Khattab said. “This is something that will last with them forever.”

The program focuses on leadership, experience, ethics and character apart from just completing an entirely student driven and completed project.

“There’s nothing equivalent to touching someones life,” Khattab said. “And this is not required to graduate, these students are volunteering and going above and beyond the graduation requirements. I think it is the responsibility of higher education to build a good citizen, and not just get a degree.”

Other projects CM Cares is working on include the AJ Project and the Brinks Family Project, both focusing on making houses of families in the community more accessible.

As the warmer weather sets in, James and Libby will have a deck, a swing, a sandbox and an entire newly landscaped backyard to enjoy the coming summer months.

“As soon as the deck was there, James was in and out and spinning circles on the deck and just going in and out of the house, he just wanted to be outside,” Waechter said.