Agriculture education event moved to library due to weather 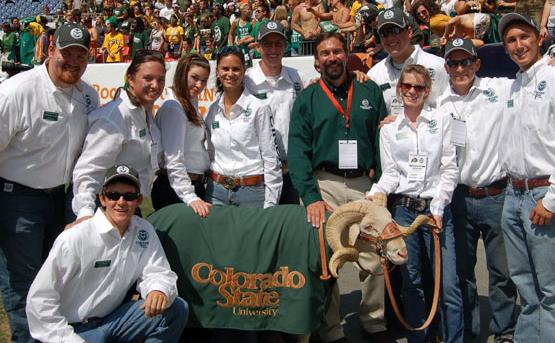 Cam the Ram is surrounded by handlers (white shirts), and Tony Frank at the Rocky Mountain Showdown in 2012 in Denver.

CAM the Ram probably isn’t allowed in Morgan Library, but all else will go as planned.

Today from 10 a.m. to 2 p.m. the College of Agriculture welcomes students to visit the library event hall, Room 167, for Ag Adventure on Campus. The event is geared toward agriculture education. The event was scheduled to take place on the Lory Student Center Plaza, but was moved due to Monday’s snowstorm. Student groups and industry representatives will be giving away corn nuts, potato chips and facts about the agriculture industry.

Events like these are important in helping inform the public of the current issues facing the nation’s food system, according to Nancy Irlbeck, associate dean for academic affairs in the College of Agriculture.

“We need to increase food production by 70 percent (by 2050) with less land, less water and less resources, and frankly we don’t have the technology. We are on the cusp of starvation,” Irlbeck said.

While Irlbeck believes these challenges can be conquered by training young men and women to think outside the box to develop new agricultural innovations, she feels that many intelligent candidates have been discouraged from entering the agriculture industry by societal stigmas.

“Teachers were telling their best and brightest not to go into agriculture,” Irlbeck said of the loss of students to other vocations.

The Ag Ambassadors, a group of student leaders in the Agriculture College, developed Ag Adventure in order to educate consumers on the issues facing the industry and their role in the food system as purchasers, according to Jessica Milstein, an agriculture education major who is spearheading the event.

“These students are aware (of the problem), and they are frustrated others aren’t aware. They are great advocates for our global food system,” Irlbeck said of the student Ag Ambassadors.

Milstein grew up surrounded by agriculture on her family’s 80-acre ranch on the western slope of Colorado. She’s happy to have the opportunity to share her passion with the rest of the student body.

“I love teaching people about where their food comes from and the science behind animals, plants and the world around us,” Milstein said.

And that’s what Ag Adventure on campus is all about. The event hall will be crowded with student groups from the College of Agriculture and industry representatives including Colorado Corn, the Colorado Bee Keeper’s Association and the Colorado Potato Farmers.

Representatives of Colorado organic industries were invited but unable attend.

The event will be hosted by Trent Loos, a national agriculture radio broadcaster with a world famous handlebar mustache.

“The goal is to bridge gaps and build trust in CSU students, because they are the ones driving the market. The decisions they make now impact the future,” Milstein said.

Industry advocates hope to use today’s event to clear up misconceptions so consumers can make more informed decisions.

“There are so many folks who haven’t been raised on the farm; there are a lot of people who don’t know the difference between field corn and sweet corn,” said Jared Fiel, communications manager of Colorado Corn.

Industry representatives are willing to discuss any issues students might have with the current food system.

“We want to hear questions. We’re excited anytime we can be the face of (agriculture) in front of folks,” Fiel said of sparking a conversation between consumers and producers.

The conversation continues this evening with a talk entitled “Agricultural Confessions” beginning at 5:30 p.m. in the LSC. Loos will focus on the five key issues in agriculture in order to encourage a campus-wide dialogue, according to Milstein.

“This is a good opportunity to learn more about some of those touchy issues,” Milstein said.

Everyone is welcome at this evening’s event. The Ag Ambassadors ask that students R.S.V.P. to csuagadventure@gmail.com to ensure there are enough refreshments.