4/20: A very different day in Boulder 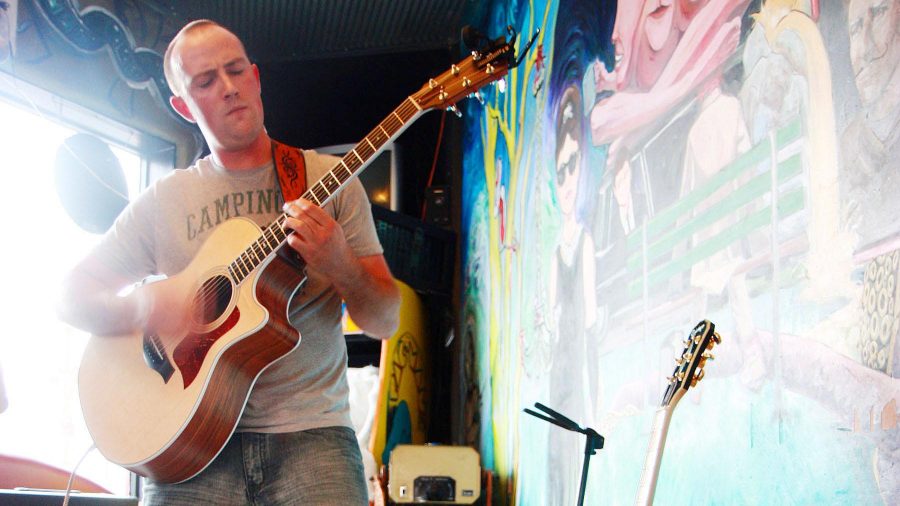 Andy Fenton jams out on his guitar at the Lyric Cinema Saturday afternoon during the Lyric's 420 Blazed and Confused event. Along with the many 420 celebrations around town, musicians like Fenton flocked to bars, coffee shops, and quirky stores to play music as part of the annual FoCo MX festival.

While Colorado State students were able to work and play freely this April 20, or “4/20,” University of Colorado-Boulder students experienced the second annual lockdown of their campus.

Last year, the CU administration spent $124,561 to shut down campus and limit access to I.D. holding students and authorized guests only. This was in addition to the $154,236 spent by the CU student government to bring Wyclef Jean on campus as an alternative to the world famous “4/20 Smokeout” that typically takes place on campus, according to a university press release. The university made these efforts in an attempt at limiting non-CU affiliates from entering campus, according to Bronson Hillard, a CU media spokesperson.

“We do not want 12,000 people on Norlin Quad disrupting research and academic activities,” said Bronson.

Amy Barfield, a CU senior, admitted that the gathering was beginning to attract an interesting crowd, but that the university’s efforts to hamper the smokeout were excessive.

“There was a lot of riffraff (on campus) two years ago, but last year was ridiculous,” Barfield said.

This year, the student government chose not to shell out the funds to bring another rap sensation to Boulder, but the administration was no less stringent. Boulder police officers were posted at every university entrance, and a small army was staked out on the infamous Norlin Quad where thousands of people congregated at 4:20 p.m. each year to wage a peaceful protest on drug laws.

“It was a protest. Now that it’s legal, we’ve got nothing to protest,” Hannah Herreid, a CU student and lifelong Boulder resident, said of changing perceptions because of Amendment 64.

Although student attitudes towards mass gatherings on 4/20 may be changing, the CU administration was not ready to take any chances. Ramped up security effectively emptied campus, leaving more squirrels and policemen on the quad than students. Officers only had to turn away a few individuals who hadn’t heard of the closure.

“Everyone seems to get the point. I think everybody (who wanted to publicly celebrate) headed up to Denver today,” said a Boulder police officer stationed at 18th and Broadway.

Hillard defended the administration’s decision by describing university property as only quasi-public. Because of existing state and federal drug regulations, CU can, and must, take all efforts to keep marijuana usage off of campus, Hillard said.

“We are not an unlimited public forum like a public park. We are simply trying to preserve our campus,” said Hillard.

“Our campus police have patrolled as usual in the past on 4/20 and that is the plan for this year as well. CSUPD will treat marijuana the same on 4/20 as it does on any other day,” Mike Hooker, executive director of public affairs for the university, said last week.

Alexander Manigault, an employee at the Morgan Library help desk, said library attendance was no lower than usual because of 4/20.

“It was pretty normal. Of course, weekends are slower than weekdays, but there were a normal amount of people (in the library),” Manigault said.

Rob Meyer, a mechanical engineering major, who spent his Saturday enjoying the grooves of Fort Collins Music Experiment, was pleased that CSU didn’t feel the need to go to the same efforts as CU on 4/20.

“I think we’re a little bit smarter about it out here than, say, Boulder,” Meyer said of CSU students being less public about their use of marijuana.

He agreed that 4/20 was on everyone’s minds, with every musical group giving a shout out to the holiday, but he did not notice students openly smoking marijuana in public. Meyer assumed that most CSU students interested in celebrating did it in smaller groups in the privacy of their homes.

“I don’t recall anyone out and about exploiting their rights (to smoke marijuana),” Meyer said.