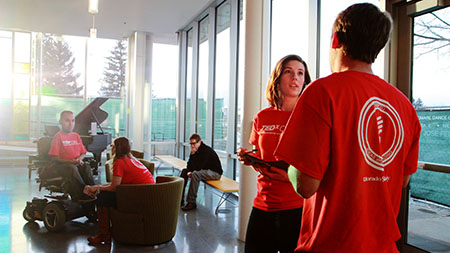 TEDxCSU founder and CSU graduate, Hannah Toole, talks with TED President, Brandon Parsons, about the TEDxCSU event this Saturday. Along with Toole and Parsons, other TEDxCSU members met Thursday afternoon at the LSC theatre to fine-tune final event details.

Saturday, the Lory Student Center Theatre will have every one of its 500 seats filled. And if ticket holders don’t get there early enough by the time doors open at noon, the Ramskeller will be holding the overflow.The crowd will be there for a once a year event that is completely sold out –– TEDxCSU.

Technology, Entertainment, Design (TED) is a nonprofit organization with a mission “devoted to Ideas Worth Spreading” according to its website. The group puts on conferences full of lectures given by people who are extremely passionate about a given topic.

With TED’s mission in mind, TEDx programs were created. They are “designed to give communities, organizations and individuals the opportunity to stimulate dialogue through TED-like experiences,” according to TED’s website.

Two CSU students travelled to California to experience TED’s main conference and returned with the drive to create TEDxCSU, according to Brandon Parsons, TEDxCSU president and senior landscape architecture major.

“From the initial roots, this has grown to be an incredibly interactive and positive experience,” Parsons said. “From that little seed it has really grown, thanks to every member of our team.”

There is an expanding core team and a leadership team comprised of students who work to make this event happen. The students involved do not get paid, so Parsons describes their effort as truly coming from their hearts and enthusiasm for this.

This year is the second time a TEDx event will be at CSU. In 2012, the event sold out in Fort Collins’ local Lincoln Center. The lectures were given by reportedly big-name speakers and the event was “amazing,” according to Parsons.

“Last year we had a lot of heavy hitters,” Parsons said. “This year we have some really brilliant minds who are a lot more local and personal.”

“Last year I was a speaker ambassador for TED, so I was backstage helping the speakers,” O’Rourke said. “That inspired me to speak at this years event.”

He is speaking about an organization he started called BEarth-Day. The group turns birthdays’ emphases on receiving into giving, making them more positive for the earth, the community and other people, according to O’Rourke.

“I’m really excited to speak and definitely nervous,” O’Rourke said. “I’ve never spoken in front of so many people. A lot of work has gone into this, but overall I’m excited to get up there and share something I’m so excited about.”

The TEDx experience is about more than just the speakers, Parsons said. The environment is captivating, there are incredible people to meet and it makes education fun.

“TED talks are really important as different perspectives on something need to be considered and such perspectives make us think in a new way that we haven’t before,” Anna Kearney, a master’s student in the horticulture college, wrote in an e-mail to the Collegian.

Kearney wasn’t able to get tickets to the event, but she plans on watching the videos of the TED talks at CSU.

“The ideas we are spreading transcend age and location,” Parsons said. “Bringing students into this and seeing them captivated by this is really huge for me.”