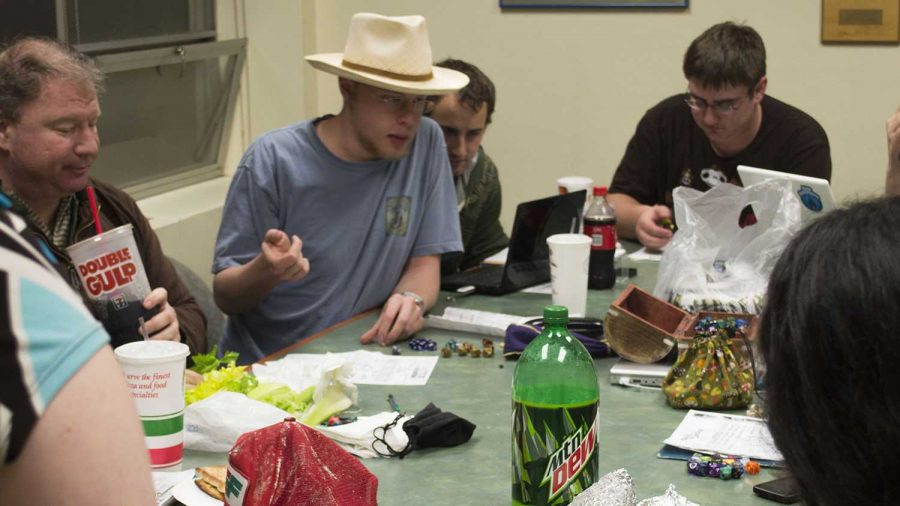 The Sci-Fi and Medieval club plays a post apocalyptic game that features zombies and vampires last week. The club was also playing Dungeons and Dragons.

Saturday night, the halls of the Lory Student Center rang with the voices of stories being told.

From the upstairs, faint conversations about strategizing in a post-apocalyptic world were heard, along with musings such as, “I need there to not be vampires performing blood magic on the roof of the building across from me.”

In other words, the Science Fiction and Medieval Club met for their weekly tabletop role playing games.

Amanda Dierks, community outreach and recruiting officer for Sci-Fi and Medieval Club, was running a zombie apocalypse that involved about 13 members.

Players filled out character sheets that acted to develop a character that the player would interact with in the story.

“You build your persona… and by rolling dice, or by the attributions on the character sheets, you randomly determine what your character can or can’t do,” Dierks said.

Dierks said she focuses on storytelling when she’s the leader, as well as the players being a part of the story and creating their own.

“This is my social outlet where I wouldn’t see these people otherwise. It’s a time to set aside for telling stories,” Dierks said.

Political science major Elle Sunder,  who serves as president of the club, first joined in 2001 when she began studying at CSU.

Sunder got involved when a boyfriend got her into role playing board games to test a game out on a newbie player. Sunder went on to become the current president of the club and wife to said boyfriend.

“When I run my games, I like seeing other stories develop within mine,” Sunder said. “It’s a great opportunity to expand your imagination and to learn a lot with such highly educated people.”

Dierks revealed that her and her father build boats — a skill that she has used in her characters.

“You get to be creative, social and build your leadership skills,” Sunder said.

The club began in 1997 when role playing games first began to catch on; since then, it has grown immensely, according to Sunder.

But being a part of the Sci-Fi and Medieval Club isn’t always dragons and flowers.

“There’s a lot of stereotypes you deal with, like people saying ‘oh that’s really nerdy,’” Dierks said. “They’re not wrong, but it’s just a lot of different people who gather to tell stories.”

For Dierks, role playing games are a form of creative expression that includes storytelling, fact finding, curiosity and interacting with others. To create knowledgeable characters, the players research different attributes and knowledge that their character is listed as knowing.

“For example if someone’s really interested in archeology, then they could say, ‘I want to play a professor of ancient Mayan culture.’ Then it gives them an excuse to look up facts and to enjoy their own interests,” Sunder said.

The club draws students from all areas of campus, but member Antonio Faloona, theatre performing major at Front Range Community College in Fort Collins, cited a study he read recently that found the top two majors that are involved in role playing games are art and history majors. Faloona also said he noticed a large number of participants with computer sciences majors.

Sunder attested to the strong connections that the players gain while being involved.