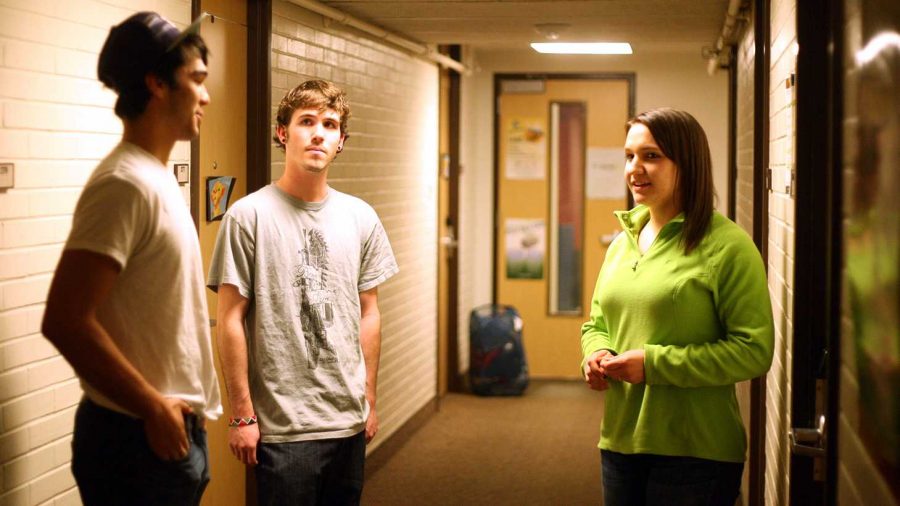 Kate Amsden, right, a second year RA in Parmele Hall, checks in with her residents Monday night. A Resident Assistant helps develop community for students living in the halls.

They are the only upperclassmen who volunteer to live on campus, help freshmen constantly and eat dorm food for longer than just one year.

“I came in my freshman year not knowing what an RA was,” Kate Amsden, a Parmelee RA, said. “But I was always the one trying to get my hall together and create a sense of community.”

A Resident Assistant (RA) is a sophomore, junior or senior student who applies to spend his or her time to live on a dorm hall with mainly freshmen. RAs are supposed to create a sense of community between the people living on their hall and help them to be successful in “the crazy world that is college,” according to Amsden, a senior health and exercise major.

“My experience with my RA has been great. She is amazing, she is always willing to talk to you if you need help,” freshmen Joe Tiner said. “She’s informed about what is going on on campus and if you ask her a question and she doesn’t know the answer she will find out. She has made living in the dorms great.”

Being an RA isn’t only a help to the freshmen, said Shanel Hughes, an RA in Braiden. Hughes,  a junior communication studies major, added that as much as she helps her residents, they help her as well.

“It’s nice to feel important and like you matter in this big CSU community,” she said.

Being an RA means giving up living off campus with friends, which some would consider a downside. Brad Huntington, a Summit Hall RA and senior natural resources management major, disagreed.

“Living off campus was OK, but I missed the connection to CSU that I had living on campus,” Huntington said.

Living on campus also reduces stress when it comes to paying bills, finding parking or cooking for yourself, Hughes said.

Not everything is all about the free room and board when it comes to being an RA, according to Huntington. The job is a lot harder than just living with freshmen.

“There are times when I think to myself, ‘why do I do this? It’s hard and it sucks,’ ” Amsden said. “But then something happens where you impact someone and you can’t imagine not doing it.”

It can be hard for RAs to find the right balance between being there for residents as their support and a friend, while also being able to enforce the rules and be an RA, according to Hughes.

“The actual rules aren’t that hard to enforce because my residents know all those rules,” Amsden said. “The community rules are harder. I rely on (the residents) to remind each other of these.”

The best part of being an RA can be debated, but Huntington said he thinks it is being able to develop a relationship with people who create a community.

“I like getting to see their journeys. Everyone starts out lost and confused,” Amsden said. “I like to see where they are at and where they are going and be involved with that.”

An RA is a lot more than just the upperclassman living within a floor of freshmen, according to Hughes.

“I love getting to know amazing students and being a part of their lives and forming those relationships,” Hughes said.