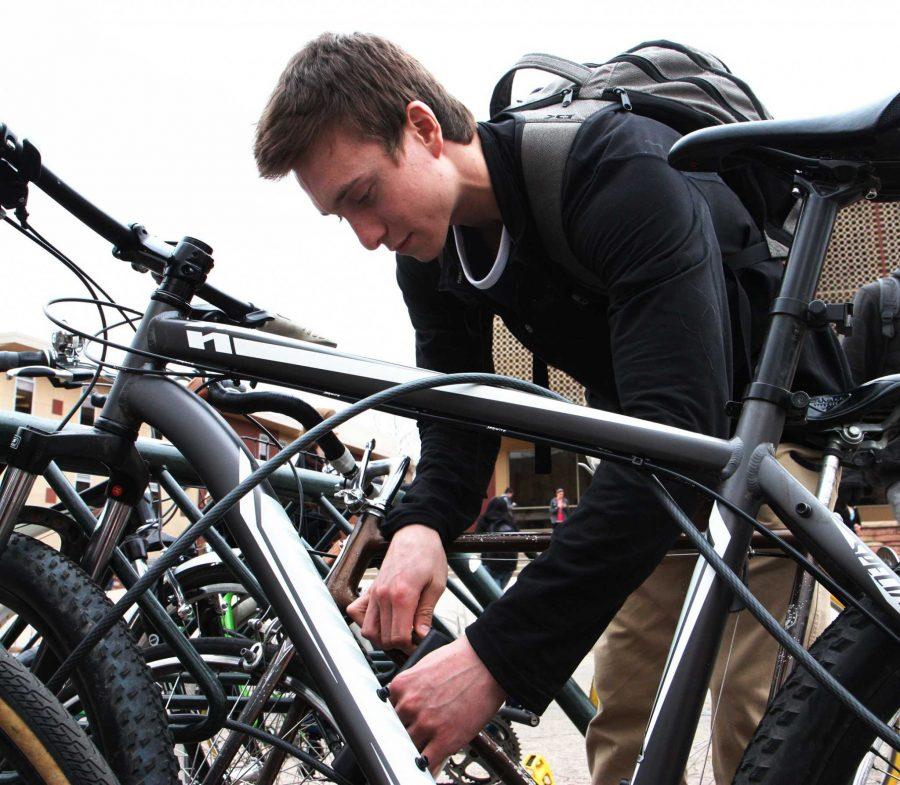 Freshman buisness major, Aaron Avery, locks up his bike outside of Clark A. Avery never leaves his bike at bike rack unlocked in fear of the common occurance of bike theft on the CSU campus.

As one of the top 12 bicycle friendly campuses nationwide, Colo. State is no stranger to packed bike racks, the whirring of wheels and clacking of gear changes, as well as sharing roads around Fort Collins with bikers.

However, the city of Fort Collins and CSU both have ambitious plans in store for a greener community.

ASCSU, CSU and the city are in discussions for the incorporation of an extensive bike-sharing network in the city. Fort Collins is still working out the logistics of the project, which is loosely based on Denver’s sharing system.

The main goals of the upcoming projects, including bike sharing, are to merge transportation methods at CSU and increase campus accessibility. With projects such as Academic Village North, the closing of Meridian Ave. and the possibility of an on-campus stadium, CSU is swiftly losing parking options for students.

“Fort Collins and the university are trying to facilitate transportation to and from campus using several different options,” Andrew Oringer, Director of Sustainability for ASCSU, said.

The lending service and the overnight lockers will be located at a new transit center to be built and operational by 2014. The transit center is part of an even larger plan: MAX Bus Rapid Transport (BRT).

Also known as the “rubber tired lightrail,” the MAX program will provide rapid shuttling from Old Town to Harmony Rd. in approximately 10 minutes. The BRT will have priority at all traffic signals and will have service every ten minutes.

The project costs between four and five million dollars and is already paid for by state and federal grants.

Students and locals alike have noticed the massive increase in roadwork the past few months, perhaps without knowing that this project was the real reason for it.

Traffic on Prospect Rd. and the ongoing projects along the Mason corridor are the beginnings of this project, which will eventually have 14 stations.

The tracks will extend from Old Town all the way down to Harmony Rd. The largest stop will be located at the University Station, on the eastern side of campus.

Along with each stop, the city hopes to incorporate an automated bike-sharing kiosk. The plan is in early stages and it is anticipated that a pilot program will be launched at the University Station.

“Campus is a natural location to have the automated system,” Molly North, Interim Bicycle Coordinator for Fort Collins, said.

Fort Collins currently has its own bike-sharing program at the FC Bike Library, but the federal grant that has been backing it for the past five years has recently run out, making the continuation of the program more difficult.

With new plans to extend sharing, FC Bikes, as well as a few other non-profits, are competing for the rights to run the larger system.

“Currently, (the library) is a personal kiosk and so much more than just a lending service,” Stacy Sebeczek, director of the FC Bike Library, said.

Sebeczek takes pride in the experience of face-to-face interaction and giving riders advice, route plans and maps. However, she is also excited that customers can get out of the “rut” of high-demand and low maintenance and have a quick and efficient system to rely on.

According to Sebeczek, the library has had issues getting bikes back into the rotation because they need to be transported and maintained before they are sent back out. With expansion, the sluggish routine would be sped up to meet higher demand.

“(Students) have traditionally been one of our primary users,” Sebeczek, said. However, the student demographic found itself sharing due to high interest within the general community.

By having the pilot program at CSU, the city hopes to gage the reception to the sharing program.

“We are interested in finding a way to incentivize students at Front Range and CSU and employees to get into the program,” North, said.

North hopes that the option and ease of renting will also encourage businesses to create wellness programs. North has also considered potentially working a small cost into student fees to cover rentals for students.

Federal funds and funds from corporations are available for the purchase of bikes and helmets. The issue with money will most likely come from operations and maintenance costs to keep the bikes functional and within circulation.

Fort Collins received a grant from the Environmental Protection Agency to aid in the technical components of launching the program.

“We are stakeholders but there are currently no plans for ASCSU to give money to the project,” Oringer said.

ASCSU has plans to survey student interest in the program when plans become more concrete. According to Oringer, students will not see any cost increases, for now.

“The university has made a commitment to bike culture,” North said. And it seems as if the future looks green for CSU.

Staff writer Mariah Wenzel can be reached at news@collegian.com