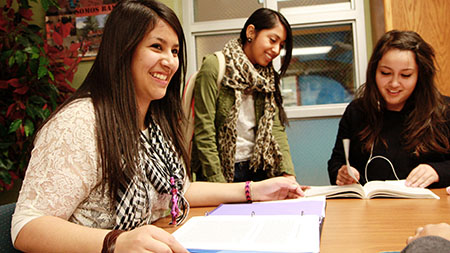 Claudia Hernandez enjoys the company of her friends, Angelica Cruz and Sonia Cortez Tuesday afternoon in the El Centro office. Much the time Hernandez and other CSU students spend in El Centro is about meeting like-minded people and building relationships.

It was when Claudia Hernandez, a sophomore student, was very young that she first heard about César Chávez.

Friday, March 22 marked the beginning of César Chávez week at CSU with a tribute through artwork and music, ending Friday, March 29 with a presentation by Dr. Gloria Velásquez.

“My dad talked about (Chávez) — he was really into the migrate farm worker movement,” Hernandez said.

Hernandez’s father worked in the fields for a few years before she was born, supporting himself, as well as his family, in Mexico.

Chávez, like Hernandez’s father, began as an American farm worker. He grew to become a labor leader and civil rights activist who co-founded the National Farm Workers Association.

Hernandez agreed that Chávez is a figure to look up to, especially for her as a first generation student in her family, making her the first person in her family to attend college.

“The things he did, he brought so much change on the farm workers. The conditions now aren’t that great, but they used to be worse,” Hernandez said. “It’s important to have that awareness, and I’m glad he brought the movement for Latinos and Hispanics to go where no one has gone before, like college and not just end of like a migrate farm worker, but to go places.”

Coming to higher education, according to Hernandez, makes her family proud and motivates her to be an example for siblings and cousins.

“It gives me a huge sense of pride to know that I can come here and have the opportunity that a lot of people in my family didn’t have and to make a difference,” she said.

Hernandez sees Chávez week as a time to emphasize the diverse populations on campus and to spread awareness.

“I’m really engaged within the Hispanic community,” Hernandez said. “Things like this could make it better to spread diversity about us and us being here … It’s important for us to know that there are people like us who have the same background as us.”

As for CSU, Hernandez thinks that the university has work to do when it comes to diversifying campus.

“It’s very important to learn about each other’s culture and understand each other in a much better way. There is a diverse community at CSU and there should be attention brought upon that,” Hernandez said.

Beyond campus, Hernandez sees reinforcing of stereotyping towards her community and hopes to change this through her career after college.  While she is now undeclared, she hopes to go into the College of Business.

“What I plan to do with that is to go out there and have a concentration in marketing. Particularly go out there and use my cultural background to market products. There have been many commmericals that are stereotyping to incorporate culture into products,” Hernandez said.

As a fluent Spanish speaker, Hernandez watches Spanish television and commericals that she finds very stereotypical.

“It’s just not pleasing for me to see that. It doesn’t make me angry, but I don’t find it appealing that it’s enforcing a stereotype,” Hernandez said.