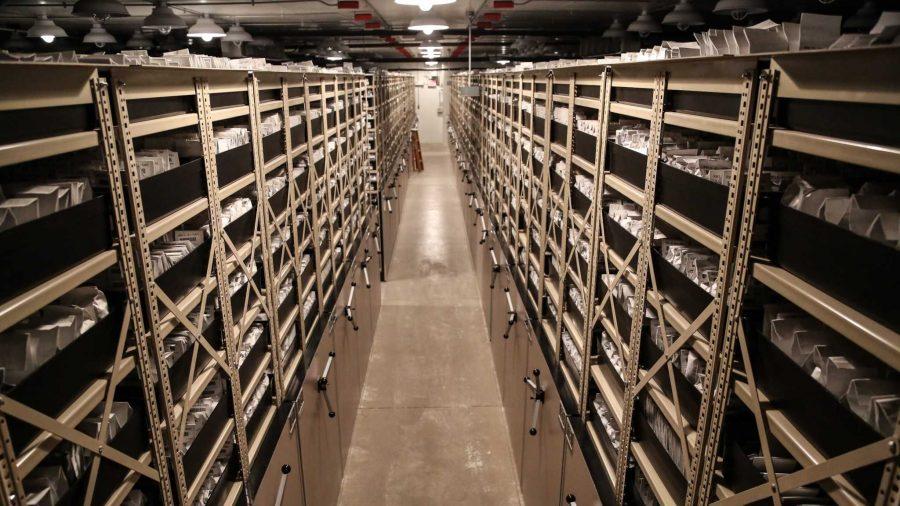 The seed vault at the National Center for Genetic Resouce Preservation on campus. The 5000 square foot freeze chamber is home to over 700,000 varieties of seeds from around the world.

On the east side of campus stands a building that makes CSU truly unique: the National Center for Genetic Resources Preservation.

The NCGRP, commonly known as the seed bank, is a U.S. Department of Agriculture facility that focuses on collecting, testing and housing samples of seeds, tissues, buds and animal genes. The samples are grown where they grow best, collected and sent to CSU for testing and long-term storage, according to David Dierig, Ph.D., research leader and location coordinator.

At nearly one million seeds, the facility houses almost every kind found in the U.S. and several from other countries.

One reason the NCGRP is necessary is because researchers began to realize there is a global loss of genetic diversity among both plants and animals, according to Patricia Conine, supervisor of the Seed Quality Evaluation Lab.

“Food crops are becoming closely related and there’s not a lot of disease, drought or insect resistance,” Conine said. “It is this lack of resistance that led to such disasters as the Irish Potato Famine.”

Having a place where seeds can be kept safe provides an opportunity for research. Scientists can use what they have in these seed banks to find a solution to a problem that is endangering food sources.

The seeds and other materials come from 25 to 30 active sites that are responsible for distributing to researchers like the ones located here.

Seeds are brought to this facility to be analyzed for any kind of abnormality. If such abnormality is identified, the seed is catalogued, bar coded and stored long-term in foil-lined bags to be placed in one of the two kinds of storage on site. Most plant seeds are housed at a temperature of zero degrees Fahrenheit, while most animal samples and vegetative materials are held cryogenically at 320 degrees Fahrenheit below zero.

The vault in which this storage is located is technically an entirely different building than the one that NCGRP calls home, built to withstand natural disasters such as tornadoes, floods or earthquakes to keep the invaluable information inside as safe as possible.

Additionally, all research has duplicates in other centers all over the world, so the information cannot all be lost at once.

“We are long-term backup,” Conine said. “We do research for longevity and the longer we can store things, the better.”

Currently, some samples being stored have been there for 30 to 35 years. It is believed that they will be able to stay there for another few hundred years.

The NCGRP will take a 5 percent cut in funding due to federal sequestration, according to Dierig. Even with this loss, Conine said the NCGRP is still expanding. It is currently involved in national microbe research and backing up international research by sending thousands of samples to dozens of countries.

“We are basically a big library of genetic material,” Conine said. “It’s really just the tip of the iceberg with what storing can be prepared for in the future. We’re just trying to stay one step ahead of all the insects and pathogens out there.”