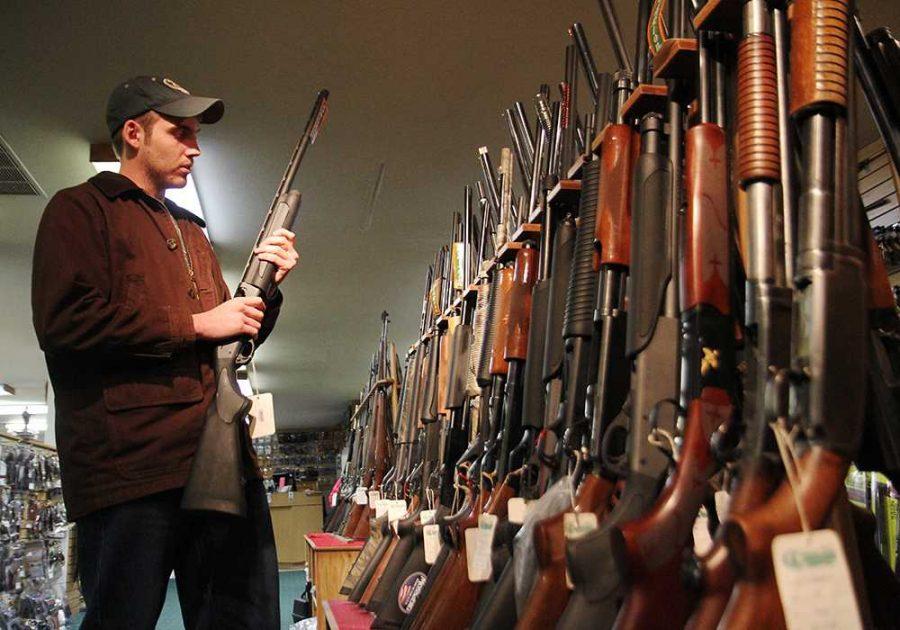 Wildlife Biology major Sam Peterson browses through the shotgun collection at the Rocky Mountain Shooter Supply off of Mulbery Tuesday afternoon. The store reports an increase in gun sales since the recent Sandy Hook shootings.

CSU requires students living in campus dorms and apartments to sign a waiver that requires them to refrain from bringing weapons into on-campus residences. A debate has ensued because, while some believe this waiver promotes campus safety, others believe it is a violation of students’ second amendment rights.

“I wouldn’t opt to live in a dorm that allowed weapons but if it helped to find a middle ground between both sides of the gun debate then I’m all for it,” said Sam Starr, a senior political science major and member of the CSU College Democrats.

The debate was fueled partly by a Colorado Supreme Court ruling on a case brought against the University of Colorado. Students for Concealed Carry on Campus argued that CU’s Weapons Control Policy violates the Colorado Concealed Carry Act and their Second Amendment right to bear arms.

Legislators and campus officials agree that the issue lies in whether college campuses are public or private property. If they are public property, campus regulations must abide by state law. If they are private, each college can determine their own regulations and institute gun-friendly residence halls regardless of state legislation.

“If you have a concealed carry permit you can carry your firearm around campus, as long as it’s concealed,” CU–Boulder Police Department spokesperson Ryan Huff said.

Guns are not allowed in the dorms or ticketed events because, according to Huff, attendees and residents enter into a contract when they come to the venue and thereby agree to abide by the rules of that venue –– rules that do not allow firearms inside.

According to CSU Spokesman Mike Hooker, CSU follows Colorado laws. There are weapons restrictions in the dorms and at athletic events, but students who wish to have weapons on campus can check them in at the CSU Police Department.

Even students who are in favor of concealed weapon legislation are concerned about how the creation of a gun-friendly dorm would create deeper divisions among the student body.

“I think with something as controversial as gun laws, right now especially, differentiating students on campus who have guns from those who don’t isn’t the best way to go about creating a separate but equal ambiance on campus,” junior journalism major Mackenzie Tappy said.

Tappy grew up in a family of avid hunters and said she spent quite a bit of time at the gun range. But regardless of her position on the gun issue, Tappy said separating pro-gun students in a living space apart from the rest of the student body would do more harm than good.

“Taking a group of people who follow a certain ideology and segregating them from everyone else isn’t going to solve anything,” Tappy said. “Guns scare people — some people aren’t comfortable with them and housing a bunch of students together, especially students younger age, knowing that these are people who support and abide by carrying guns and concealed weapons, doesn’t do much for the safety and well being of others.”