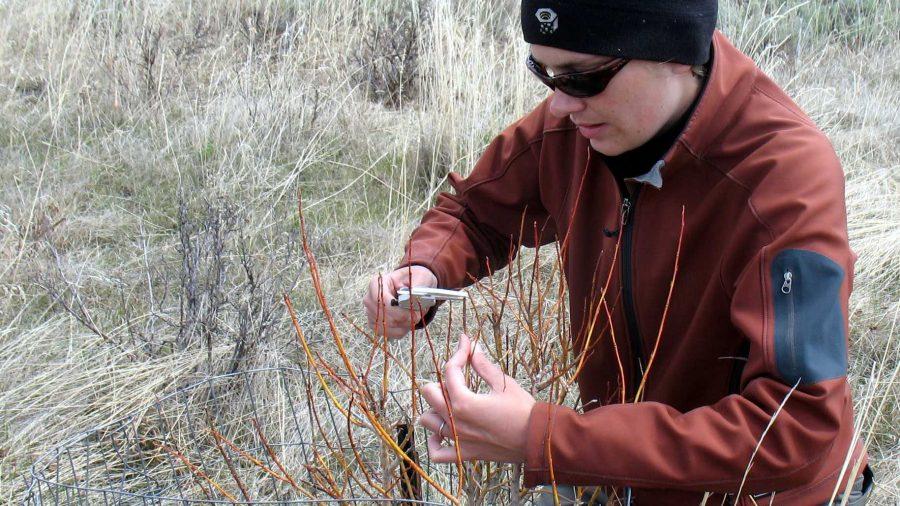 Kristin Marshall measures measures the diameters of browsed willow stems with calipers, at none of her experimental sites. In the spring, her and fellow researchers measure diameters of willow stems at the base and at the browse point to estimate how much biomass has been removed by hungry ungulates (elk and bison) over the winter.

In 2008, CSU graduate student Kristin Marshall, who currently is employed by National Oceanic and Atmospheric Administration Northwest Fishery Science Center in Seattle, was given the opportunity to work on a grant-funded research project concerning the reintroduction of wolves in Yellowstone National Park, where they became extinct in the early 19th century.

“They wanted to understand what is happening in Riparian areas after the reintroduction of wolves,” Marshall said.

Riparian areas are the corridors along streams, which are wetter areas where certain plants –– willows in particular –– live.

“The idea is that if you take predators (wolves) out of an ecosystem, this causes changes broadly across the ecosystem, particularly in plant communities … very little evidence exists about what happens when you put them back,” Hobbs said.

While it is tempting to believe that the alterations can be restored by putting the wolves back, the results of their experiments show that it is quite a bit more complicated than that.

Hobbs explained that when wolves disappeared, the Elk population rose, causing the willows to get browsed down — and in many ways, eliminated — along the stream banks in the northern range. As a result, the beavers in those streams began to disappear because they needed the taller willows to eat and build their dams, Hobbs said.

When the beavers left, the dam building activities ceased, along with the willows.  Essentially, the beaver dams create a habitat for the willow by creating damp soil and mud in the surrounding areas, which is what the willows need for their seeds to germinate.

“So, the loss of beaver is an example of a change in the system that is very difficult to restore simply by putting a predator back in the ecosystem,” Hobbs said.

Marshall explained no one knows if the beavers will return within a matter of time, or if the ecosystem has changed so much that it will be less possible for this to occur.