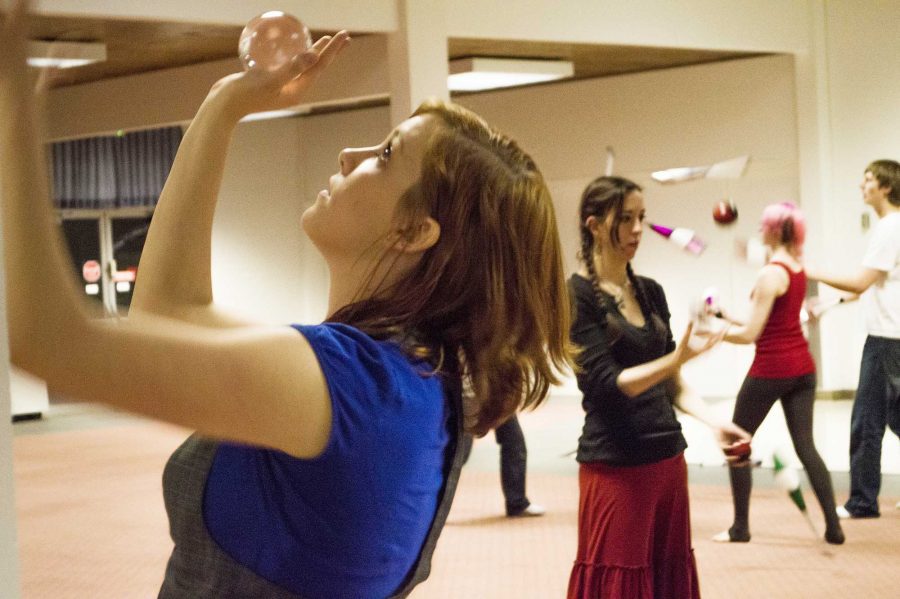 When was the last time you saw juggling, unicycling, acrobatics and hula hooping in one place? For some, it was just last Tuesday at the Circus Club meeting in Ingersoll Hall.

The group meets every Tuesday to enjoy circus arts together to express their interest in this topic.

“We all had a mutual interest, a mutual talent, and we all wanted to have fun,” Circus Club President Aubrey Arensdorf said.

According to Arensdorf, the club has grown rapidly, and many members didn’t have circus talents of their own — they joined just to learn.

“The spirit of teaching is really strong in this club. If you look around today everyone is doing something different,” Arensdorf said. “You can see someone teaching someone else actively.”

Arensdorf first learned how to contact juggle, and toss juggle later, but she likes to teach everyone that comes through the door at least some form of juggling.

A large majority of club members are freshmen, perhaps because of the location of the meetings in Ingersoll Hall. When the club started, it consisted of about four or five people and now has around 25 members, according to Arensdorf.

“It’s really laid back. We really let loose and have fun. We have busy schedules and we’re stressed out but when we come here we get to work on something that’s totally different,” Arensdorf said.

For Arensdorf, joining the club was all about enjoying something together.

For Kelsey Thompson, senior biochemistry major, the Circus Club is more than just a pastime.

“I’ve always been interested in what the human body is capable of,” Thompson said. “That’s where my passion for circus comes from. I just want to amaze myself and see what I can do.”

Thompson joined the club, because of her boyfriend, in 2009 — the same year the club started. The club was what Thompson described as a “nomadic Circus Club” due to lack of space.

Before joining, Thompson predominantly practiced aerial dancing, which she wants to carry on into her future.

“My boyfriend and I are hoping to go to San Francisco to join a conservatory or a small circus,” Thompson said. “Circus has kind of become the next big thing and because of that, it’s an extremely competitive field and you need to be very talented.”

Behind Thompson at the most recent Circus Club meeting, a couple was practicing balancing acts.

Ridenour met a guy at a concert four years ago who introduced her to circus arts.

“I love performing. I also am a belly dancer,” Ridenour said.

Hollen was drawn to the club by Ridenour’s interest.

“I heard her passion for it and I was just enamored with it,” Ridenour said. “The love for it will continue and I’ll always find a way to show it.”

For two newcomers, joining the club proved to be an exciting decision.

Mariah Holcomb, a freshman apparel and merchandising major, came to a meeting the previous week.

“I was just walking by and I saw them in here and I just came in,” Holcomb said. “They were all really nice and I learned how to juggle.”

The next week Holcomb brought her friend, Lindsi Durett, a freshman chemistry major.

“It’s fun and it’s really unique. I think it’s one of the more open clubs. They really are welcome to everyone,” Durett said.