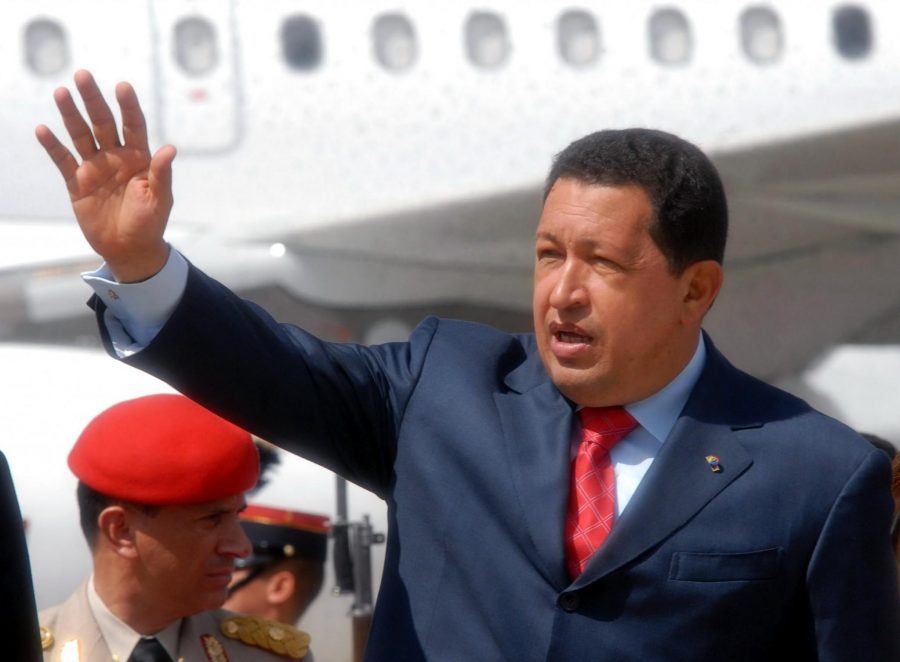 McClatchy-Tribune
CARACAS, Venezuela  — Venezuelan President Hugo Chavez survived four elections, a coup and a recall attempt as he became one of Latin America’s most charismatic, influential and controversial leaders. But on Tuesday, the socialist firebrand lost his long-running battle with cancer. He was 58.

The former tank commander died in Venezuela’s Military Hospital, just a few months after winning a fourth presidential term that would kept him in office until 2019. His passing puts Vice President Nicolas Maduro at the helm of Latin America’s fifth-largest economy until new elections can be scheduled within 30 days. It also leaves a power vacuum in this nation of 27 million — where Chavez had been the face and force of his administration since 1999. Chavez had been fighting an undisclosed form of cancer since at least June 2011, and had undergone four rounds of surgery, chemotherapy and radiation.

His last round of treatment began Dec. 10, when he was hustled onto an airplane bound for Cuba. It was the last time he would be seen in public or heard from. The surgery was plagued with problems and led to a respiratory infection, which required a tracheotomy that made it difficult for the once-verbose leader to speak. Using the nation’s vast oil wealth to push through socialist reforms and build a collation of like-minded leaders in Latin America, Chavez became a darling of the global left and beloved by many of the nation’s poorest.

As he built homes, hospitals and schools his “21st-century socialism” dramatically reduced the income gap. But as his power grew, so did the abuses. His administration expropriated thousands of acres of land and hundreds of companies, drawing fire from the business class and the traditional ruling elite. Corruption and impunity plagued his administration. Venezuela became one of the most dangerous countries in the hemisphere, beset by power outages and food shortages. Despite the problems, Chavez’s popularity rarely waned, and he won the Oct. 7 presidential race with 55 percent of the vote and an 11-point margin over his nearest rival.

Born to teachers in the agricultural heartland of Barinas state, Chavez was the second of six brothers. According to his biographers Alberto Barrera Tyszka and Cristina Marcano, he joined the military academy in 1971. It was there that Chavez was exposed to the writings of Latin American liberator Simon Bolivar and Venezuelan revolutionary Ezequiel Zamora that gave rise to his particular blend of nationalistic socialism that would guide his life and presidency.

A star pupil in the academy, he quickly moved up the ranks to commander in 1991, the same year he was put in charge of a paratrooper battalion in the coastal city of Maracay. Unbeknownst to his superiors, Chavez had also formed a secret society with like-minded cadets called the Revolutionary Bolivarian Movement. Founded in the wake of the 1989 Caracazo riots — that left more than 400 dead by some accounts — the movement was bent on overhauling Venezuelan society.

The organization burst onto the national stage in 1992 when Chavez and other mid-ranking officials tried to oust President Carlos Andres Perez — an unpopular leader who was hounded by corruption charges and was eventually impeached in 1993. The coup attempt failed and Chavez agreed to surrender as long as he could do it on national television. In one of the briefest and most important speeches of his career, Chavez introduced himself to Venezuela, asked his co-conspirators to stand down and took responsibility for the uprising.

“Unfortunately, we did not meet the objectives we set for ourselves — for now,” he said. The image of the idealistic officer in his red beret — which would become his trademark — turned him into a national phenomenon. Chavez spent the next two years in jail, building political support and co-authoring a manifesto called “How To Get Out of the Labyrinth.”

In 1994, he and his colleagues were pardoned by President Rafael Caldera. One of his first stops after emerging from jail was Cuba, where he met leader Fidel Castro. The aging communist would become a mentor and close personal friend to Chavez who referred to him as a father figure and a model for Latin America. Years later, it would be Castro who would inform Chavez that Cuban doctors had discovered his cancer.

Sensing that Venezuelans had tired of traditional political parties, Chavez founded the Fifth Republic Movement and began a national tour where he talked about the need to rewrite the 1961 Constitution. His folksy charm and anti-establishment rhetoric struck a chord. Despite facing a unified opposition in the 1998 presidential race, he won 62 percent of the vote, according to the National Electoral Council.

When he took office in February of 1999 he immediately began reshaping the country. In April, he won a referendum to rewrite the constitution. In December, the new Magna Carta — that also changed the country’s name to the Bolivarian Republic of Venezuela — was ratified with 72 percent of the vote. The new constitution required new elections, and in 2000, Chavez won a six-year term with 60 percent of the vote in a process that was questioned by international observers. By 2002, the country was beginning to bristle under his policies and his socialist reforms. Members of his inner circle resigned and demanded that he step down.

The Catholic Church and the powerful Federation of Chambers of Commerce, or Fedecamaras, also turned on him. In February, Chavez fired the upper management of the state-run PDVSA oil company, which helped galvanize the opposition. On April 11, 2002, tens of thousands of protesters took to the streets and clashed with Chavez sympathizers in front of the Miraflores presidential palace. As the body count rose, a group of military officers gave Chavez an ultimatum: Step down or they would attack the presidential palace, even though it was surrounded by civilians. In a confusing series of events, the nation’s minister of defense announced that Chavez had agreed to resign. Chavez later denied he had ever stepped down.

The following afternoon, Fedecamaras President Pedro Carmona was sworn in as a caretaker president until elections could be held. He also usurped the Constitution by dissolving Congress, the Supreme Court and the attorney general’s office, among others. As pro-Chavez sympathizers took to the streets demanding their leader’s return, many privately owned television stations boycotted the news by running cartoons and movies.

As support for the Carmona regime crumbled, commandos freed Chavez from Orchila Island and whisked him back to Caracas to assume the presidency. But the opposition remained a threat. By December, a broad coalition had organized another strike against Chavez. This time it lasted more than two months and workers from the state-run oil company, PDVSA, joined in, paralyzing the country’s main source of income and leading to national fuel shortages. By January, the government had regained control of PDVSA and fired more than 17,000 of its employees. In 2004, the opposition struck again, gathering enough signatures to call an impeachment referendum. Chavez won the vote with 59 percent. Once again, however, the opposition said the election had been rigged.

In 2005, Chavez embarked on one of the most controversial aspects of his administration: expropriating land in the name of food security and wealth redistribution. While Chavez said the policy helped expand the nation’s arable land and boosted output, imports of basic food items also skyrocketed and shortages and rationing were commonplace.

“During Chavez’s reign, Venezuelans saw a marked decrease in their liberties in all categories,” Rep. Ileana Ros-Lehtinen, R-Fla., the former chair of the House Foreign Relations Committee told The Miami Herald.

“There was less freedom of expression, more press censorship, less separation of powers, more violations of human rights, more expropriation of properties and more collaboration with tyrannies such as with Cuba, Iran and Syria. By every indicator of freedom, there was less of it under Chavez’ autocratic thumb.”

But Venezuela’s opposition also played into his hands. During congressional elections in 2005, the opposition called for a boycott. Chavez’s sympathizers swept the vote, giving him a rubber-stamp Congress that allowed him to push for deeper reforms. During the presidential election in 2006, Chavez beat Manuel Rosales, the governor of Zulia State, with 63 percent of the vote. When he began his six-year term in 2007, he vowed to accelerate his “21st-century socialism” and began a program of nationalizing key industries, including Venezuela’s telephone company and power generators.

While those moves terrified international investors, they were largely praised by some, who saw a champion in their leader.

“If one was to challenge the fates and guess how he might be ultimately judged, the doughty Venezuelan leader is likely to be seen as a man whose shortcomings were more a matter of style than substance, and who bore a genuine vision at a relatively high level of commitment to the nation’s poor,” said Larry Birns, the director of the Council on Hemispheric Affairs.

“It could be argued that his grand design for the hemisphere far surpassed any number of contending philosophies at play at the time.”

Also in 2007, the country was hit with a fresh wave of protests that were sparked after the government failed to renew the broadcast license for RCTV, one of the largest independent television stations. Chavez’s persecution of foes and rising crime led to a wave of emigration.

More than 70,000 Venezuelans are thought to live in South Florida, for example. Despite his troubles at home, Chavez was able to swap the nation’s oil wealth for global influence. In 2001, Venezuela and Cuba launched the Bolivarian Alliance for the People of our Americas, or ALBA, which was joined by Nicaragua, Bolivia, Ecuador, and other left-leaning nations. In 2004, Venezuela became a founding member of the Union of South American Nations, or UNASUR. In December 2011, Chavez played host to the hemisphere’s leaders as they formed the Community of Latin American and Caribbean States.

The organization included every nation in the region but the United States and Canada, and Chavez said he hoped it ultimately would replace the Organization of American States, which he accused of being a U.S. pawn. As Chavez’s regional influence grew, he became increasingly combative with the United States, calling President George W. Bush “Mr. Danger” and railing against the “empire” of the north.

The U.S. has not had an ambassador in Venezuela since 2008. Chavez also picked fights with the U.S.’s key ally in the region, Colombia. After former Colombian President Alvaro Uribe accused Chavez of providing refuge to FARC guerrillas, and raided a FARC camp in Ecuador in 2008, Chavez broke off diplomatic ties and threatened to invade the nation. Relations between the neighbors improved when Juan Manuel Santos assumed the Colombian presidency in 2010. Back on the home front, Chavez won another decisive victory in 2009, when he pushed through a referendum that eliminated term limits on the presidency.

After the win, he taunted the opposition, vowing to stay in power until 2031. “I have the will to live until then and beyond,” he said on national television in 2011, as he tried to reassure voters that he had beat the cancer. “And I will be here on the frontlines with all of you.”