Welcome to the Parrot World 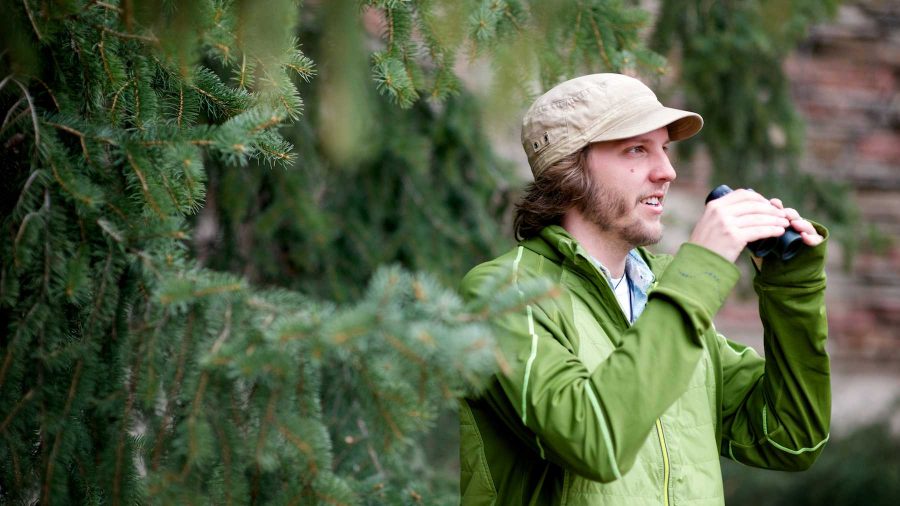 Adam miller, a senior wildlife biology major, uses binoculars to identify birds from their site and call in the Monfort Quadrangle. Miller has been involved in undergraduate research since freshman year and is currently studying how housing development affects bird nesting patterns.

He’s researched birds, bees and toads, studied in Hawaii, Panama and Australia, is a finalist for a Fulbright Scholarship –– and he’s only a senior.

Adam Miller started breeding birds at age 12 and has been dedicated to conservation biology ever since.

His father, who sells insurance for a living, helped Adam build big outdoor bird cages in their backyard in St. Louis, Missouri.

After volunteering for an entire summer feeding baby birds at a local pet store, he got his first bird.

“When I was there they had some Lorikeets come in and I was immediately drawn to them,” Miller said. “They’re really brightly colored and they drink nectar and eat fruit instead of seeds which is fairly uncommon in the parrot world.”

After researching Lorikeets, Miller found the American Lory Society, a captive breeding organization that works to promote preservation of a group of Indonesian parrots called Lorikeets –– a species of birds that are relatively unstudied.

“It’s a pretty small group of people and I’m the youngest person probably by like 40 years interested in these birds,” Miller said.

Once he got to college, his interest in birds translated into a Wildlife Conservation and Biology major. As an undergraduate, he has worked closely with Liba Pejchar, assistant professor in the Department of Fish, Wildlife and Conservation Biology.

“He was taking such initiative to reach out to faculty members and he obviously had so much passion and excitement and already a lot of knowledge,” Pejchar said. “I think he’s unusual in the sense that he already had a good sense for where he was headed in terms of the type of research and types of topics he wanted to focus on.”

As a freshman at CSU, Miller approached his teaching assistant for BZ111 and sent emails to faculty in his department hoping to volunteer on their research team.

“It takes some guts to approach a faculty member, especially as a freshmen,” Pejchar said. “It’s easy to sit through class and never interact with a professor here because it’s such a big university but I think a lot of faculty would be really receptive to working with undergraduates if they would approach them.”

Miller said he knows a lot of students look on RamWeb or look for field jobs or government jobs without utilizing the resources at CSU.

“All the graduate students teaching lab and the TAs in your classes are all doing their own research and essentially all of them need help,” Miller said. “I think that’s a great resource, especially as a freshman or sophomore.”

Ultimately, Miller would like to work with conservation biology in Indonesia.

“Indonesia has some of the highest levels of endemism –– species are only found there in the entire world,” Miller explained. “In this one region alone they have, I think it’s one-tenth of the world’s parrot species. They have the highest number of endangered mammals. But surprisingly, not a lot of people are working there.”

According to Miller, Indonesia is divided east and west. In the west, wealthy Indonesians own wildlife like parrots and monkeys as a sign of stature and power.

“It’s even a sign of resilience. Sometimes you can own a species and not get caught by the police,” Miller said.

The east is covered with giant rainforests where all the wildlife is and the people who live there are extremely impoverished.

“These people are catching these animals to feed their families. They sell them to middlemen and (the animals) eventually make it to the west,” Miller said. “It’s a tricky situation because you can’t just go there and cut it off because it’s their economy.

“Awareness programs are really a big thing because a lot of those Indonesians are really passionate about wildlife because they own it and I think a lot of times they just don’t realize it,” Miller said. “There’s been some work there that’s recently started that has shown wildlife conservation education has a huge affect.”

According to Miller, a movement that began in England is petitioning for a market based approach to the problem. Instead of the government issuing a “blanket ban” that is not regulated, people are advocating for a switch to a captive bred system.

“That would still keep livelihoods for humans and put in regulations for animal welfare and reduce this wildlife trade,” Miller said.

“I think a lot of times researchers work in foreign countries, especially with conservation. They’ll be based in America, fly there, make all these recommendations and leave,” Miller said. “There is a lot of distrust in foreign non-governmental agencies so my first goal is to get there, learn the language and work with an organization called the Indonesian Parrot Project.”

“I’d like to go there and either volunteer or work for them and start to be seen as someone that’s interested in this area of the world so it’s not like, he’s coming here and telling us what to do and leaving,” Miller said.

While this is his dream post-graduation, Miller is spending his final semester working on his senior thesis tracking bird habitats between Fort Collins and Wyoming.

Using satellite images, Miller created a gradient that shows housing density. At each of those points, he documents what species are flourishing and which are absent.

“American Robins, for instance, can do really well in high housing densities but another species like the Northern Shrike doesn’t do well,” Miller said.

This research will aid Conservation Development, an upcoming field in conservation biology.

“It looks at when we do future development or urban centers how can we build in a way that benefits the environments and humans,” Miller said. “Which species can do well with housing densities and which ones can’t.”

Erica Goad, a graduate student doing similar research, goes out into the field with Miller when he tracks the birds to conduct her own research on mammals.

“He’s really helpful and motivated. He obviously cares a lot about the work we’re doing,” Goad said. “He does his homework in advance so he knows a lot about what we’re doing before we get out there.”