Warhol Campbell’s can leaves CSU Univ. Center for the Arts, to be restored in L.A. 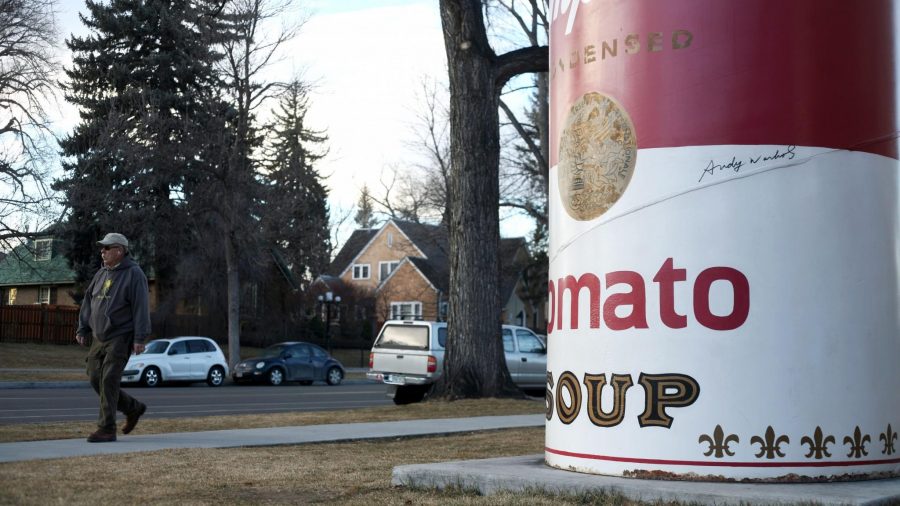 A Fort Collins Resident walks past the rusting Andy Warhol Tomato Soup Can Monday. The Soup can will be temporarily removed from the University Center for the Arts for restoration.

On Tuesday, Feb. 5 the large Campbell’s soup can that sits outside the University Center for the Arts is being sent to Los Angeles for restoration.

J. Landis Martin and his wife Sharon Martin are the two donors funding the can’s restoration. The couple noticed the can’s deterioration while on a tour with CSU President Tony Frank.

J. Martin is the founder and managing partner of Platte River Ventures and according to University Art Museum director and curator Linny Frickman, the couple was very interested in the can’s state.

Frickman worked with the Martins’ representative, Dianne Vanderlip, former curator of modern and contemporary art at the Denver Art Museum, to find the best restorer for the can.

Vanderlip chose Mark Rossi, founder of HANDMADE, located in Los Angeles. Rossi has worked with art luminaries Claes Oldenburg and Charles Ray, and is going to pay close attention to Andy Warhol’s signature, which is on the can.

The soup can was one of three pieces created in collaboration with Warhol for the “Warhol at Colorado State University” exhibit. Warhol signed the can upon its arrival at the art building on Sept. 1, 1981. The can was placed on the UCA lawn Sept. 29, 2008 after it resided on Department of Art lawn until the late 1980s.

According to Tony Phifer, senior writer for the division of external relations, the 30-year-old piece is an “iconic piece” of the UCA. The can is part of the University Art Museum’s larger sculptural plan, which is planning on adding a new architectural addition to the museum which would incorporate more outdoor sculptures.

The sculpture is scheduled to be removed at 11 a.m. Tuesday.