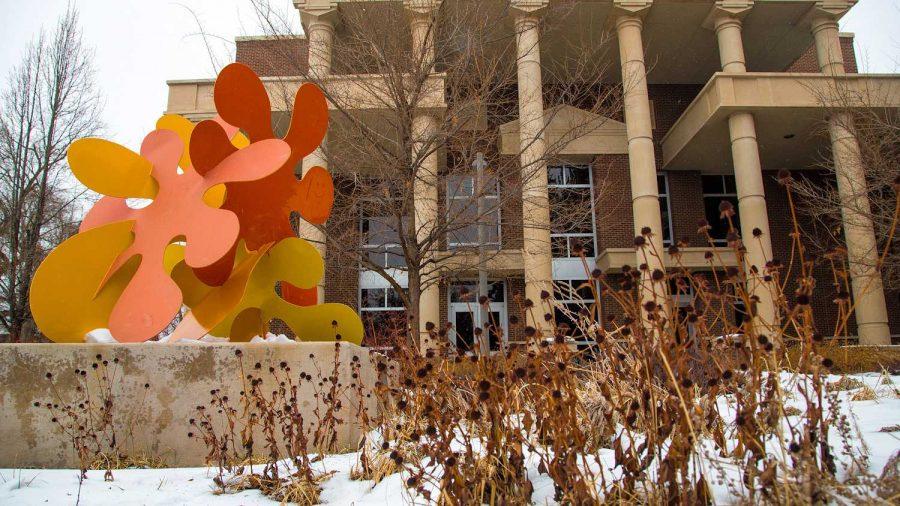 The sculpture "Steel Splat" by Doris Laughton sits in front of the University Center for the Arts. With the recent removal of the Soup Can sculpture from the UCA, the building will be adding new art instalations throughout.

The University Center for the Arts is planning on expanding its art museum to make way for a large donation of over 200 pieces of artwork coming from two local art appraisers.

The UCA began exhibiting pieces of the collection over two years ago, said Linny Frickman, director for the UCA Art Museum.

“They chose CSU to exhibit their art because they were impressed with our strong commitment to teaching art history,” Frickman said.

“Conversations about expansion began back in 2010,” said Jonathan Clifton, director of development for the College of Liberal Arts.

The expansion plan has since been approved and, according to Clifton, is estimated to cost $3 million to construct.

The 6000-square-foot expansion will extend out the east side of the art museum and will replace much of the small parking lot that sits just behind the UCA. The new facility will feature a large gallery to house Hartford and Tandstad’s collection, as well as a new classroom.

Clifton was especially pleased that a new classroom is included in the extension plans.

“Art History has never had its own classroom, and now they’ll use this one a whole lot!” he said. “Also, our outreach to the community through programs like BRAINY (Bringing Art Integration to Youth) will be expanded.”

BRAINY brings students from the Fort Collins and Loveland school districts to the UCA to showcase the department’s four major areas of study: theater, music, dance and art.

“We introduce kids to higher education in art because we want to demonstrate the arts’ role in academic success,” Frickman said. “We want to show that the arts can be used to bridge many different academic areas.”

The extension will also be able to house a private art library, which according to Clifton, will be one of the largest in the country.

Hartford and Tandstad were both renowned art appraisers who worked with many different companies, including Paramount Studios. According to Frickman, while working for Paramount, the two used their vast art history knowledge to find and acquire art pieces to use as props in films.

Their collection includes many pieces that reflect European artists throughout the ages — some even extending as far back as the Renaissance. According to Coronel, the appraisers’ collection is a standout among a community that is very interested in art history.

“We are finding many people who have a great appreciation for art history and some who have great art collections,” Coronel said.

As for the extension, Clifton said he hopes the project can begin within 18 months.

“We’ve been successful so far,” he said. “We have no announcement yet of when construction will start, but we’ve already reached 20 percent of our donation goal.”

In addition to the art museum extension, plans are in place to add a sculpture garden to the northeast side of the UCA next to the larger parking lot.