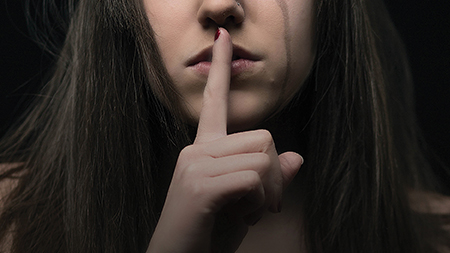 When it comes to domestic violence, numbers can be deceiving.

According to Sgt. Lonnie Chavez of the Grand Junction Police Department, domestic violence cases do not paint an accurate picture by themselves because the incidents are not crimes –– they are crime enhancers. The term refers to a domestic violence charge that can only be attached to another crime, such as battery, assault or stalking.

“Seven out of 10 [people abused] will say that nothing happened, that it was just an argument,” Chavez said. “It makes it difficult because we can’t do anything and we know it is happening, but there is nothing we can do [if they don’t report it].”

According to law enforcement and academic officials, the statistics fluctuate according to the size of the university.

“Domestic violence is in every ethnic, socio-economic background,” said Fort Collins District Attorney Emily Humphrey. “It doesn’t matter if you are educated or a male or female, domestic violence has been around.”

“People don’t think that the crime can happen, but it does. It happens all the way up: race, age, education,” Humphrey said. “Whatever work you do, whether you work a six figure job or work minimum wage, domestic violence doesn’t care.”

“I see a lot [of campus domestic violence cases]. That doesn’t mean it’s happening any more than anywhere else. It’s kind of a silent thing,” said Casey Malsam, CSU Women and Gender Advocacy Center advocate. “People assume you wouldn’t be dating someone who is violent, so then when you find yourself in that situation it’s hard to be like, ‘this isn’t going well for me.’”

For students on campus, observing the signs of domestic violence is difficult because of the oftentimes unnoticeable nature of the crime.

“Students are the most at risk for dating violence, because they aren’t experienced to see what red flags there are, and what is dangerous and abusive,” said Linda Johnston, director of the Ending of Violence Against Women Project. “It can be subtle. People think it has to be physical, but it can be verbal — it is just a different form of abuse.”

Because students do not always know what is normal in a relationship, according to Johnston, the offenders can make excuses for the abuse with reasons like love, and often blame the victim for bringing on the abuse. For this reason, many domestic violence crimes do not get reported because the victim will be fearful to report or leave the offender.

“Domestic violence is about power and control that a person wants over another person,” Johnston said. “It is difficult to get out of because you don’t know how far the offender will go to punish you for leaving or reporting. Many stay out of fear, and they hope that it will change because it doesn’t often start this way. People don’t want the relationship to end, just the abuse.”

Another problem that officials like Malsam see is that society does not always judge domestic violence for what it is.

“Our culture is set up so we have different blinders for it. [Watching television] there is violence in all of it, we just don’t watch for it because it seems like that is okay because that is how our society is set up,” Malsam said. “It has just become commonplace. We can watch a show and see domestic violence happening in front of us and not recognize it.”

“I think this is a problem everywhere and the fact that we don’t really talk about it,” Malsam said. “It makes it seem like ‘oh there is this one case, how did we not stand up for this before?’ Well it just wasn’t in your viewfinder that particular day. It is there all the time, if you are looking for it.”

“We look at Snow White when the prince comes up and kisses her while she is asleep,” Malsam said. “And it’s this big romantic moment, but under the law, that kiss is sexual assault because she wasn’t in capacity to say yes or no. So the prince sexually assaults Snow White but nobody talks about that. So it’s all around us but if we don’t talk about, we don’t see it.”

On college campuses, for example, many domestic violence cases that officials see are more nonphysical, like stalking, verbal abuse or electronic abuse.

According to Chavez, using electronics — like texting and email — creates a problem, because offenders think that it is okay since it is not face to face and people don’t think that it is as threatening via text message.

Like electronic abuse, stalking can be an issue with domestic violence, because even from a distance, the actions are used to control and create fear without violence, Johnston said.

“I think we see a lot the mental stuff playing out on campus like the jealousy issues,” Malsam said. “In dating situations, which sometimes jealousy is healthy and normal, and sometimes it crosses a boundary into being over protective, isolating, and manipulative. It is things that make us a little more uncomfortable, but that isn’t to say that there isn’t physical violence that is happening as well.”

The complexity with leaving an abusive relationship usually stems from fear of what repercussions may come from it for the victim.

Seventy percent of people who are murdered by their partner are murdered after they leave the relationship, because the offender will often feel as if they lost control and try to get it back with force, according to Laura Williams, volunteer coordinator at Crossroads Safehouse in Fort Collins.

“It is more than just a decision [to leave],” Williams said. “We like to ask, instead of ‘why doesn’t the victim leave,’ ‘why doesn’t the offender stop beating or abusing her?’ It is a natural instinct to think why don’t they just leave, and it is hard to understand, but it isn’t just as easy as that.”

Officials interviewed agreed that education and awareness are key to recognizing and helping stop domestic violence.

“You would have no problem calling in a drunk driver, but you would think twice if someone grabs another,” Chavez said. “[Students wonder] Is it my business to intervene?”

“[The other hard thing is] if we are paying attention and we see that a friend of ours is in an unhealthy relationship, what do we do?” Malsam said. “We all have this capacity to put on our superhero cape and swoop in and save the day, making the assumption that your friend wants to be saved. Sometimes they don’t or they aren’t ready to accept that part of their relationship yet.”

Victims need to make the decision themselves to leave the relationship and often it will take about seven times and going through a cycle of abuse before the victim leaves for good, Malsam said.

According to Williams, the cycle takes place in five stages — the healthy relationship, tension building, an abuse incident, the makeup or “honeymoon” and the calm relationship.

The best thing a friend can do is listen, give support and be patient — no matter what decision the victim makes, Malsam said.

“We try to encourage folks,” Williams said. “No one gets to abuse anyone. It is not your fault if you are getting abused by your partner; you don’t deserve it. Emotional and verbal abuse is still abuse.”

Malsam said that students should be cautious about going to the authorities if the victim is not in immediate danger.

By educating the public about domestic violence, more people learn about resources that are available and are able to see the warning signs or the cycle in order to help give support or leave an abusive relationship.

According to Williams, because college students are experimenting and learning to develop adult relationships, outside influences play a large role in shaping the idea of a healthy relationship.

“We are influenced by friends, family, and the media about what is a healthy relationship, or a romance we want to have,” Williams said. “And if we don’t have the education that is all we end up experiencing. It is important that young people know that they deserve to be treated with dignity and respect and the more we educate our young people about what to look for, the better off we will be.”

The WGAC and Crossroads Safehouse provide many resources for CSU students and the Fort Collins community for those who are involved in or witnessing domestic violence.

“I think students find themselves dealing with things in college that they need help with,” Malsam said. “We can do crisis intervention and help people manage their day to day life because it can be difficult. When you are dating you tend to have similar friend groups, what happens when you are no longer together and the friends chose a side, it gets complicated, things get messy. We are here to help navigate some of that.”