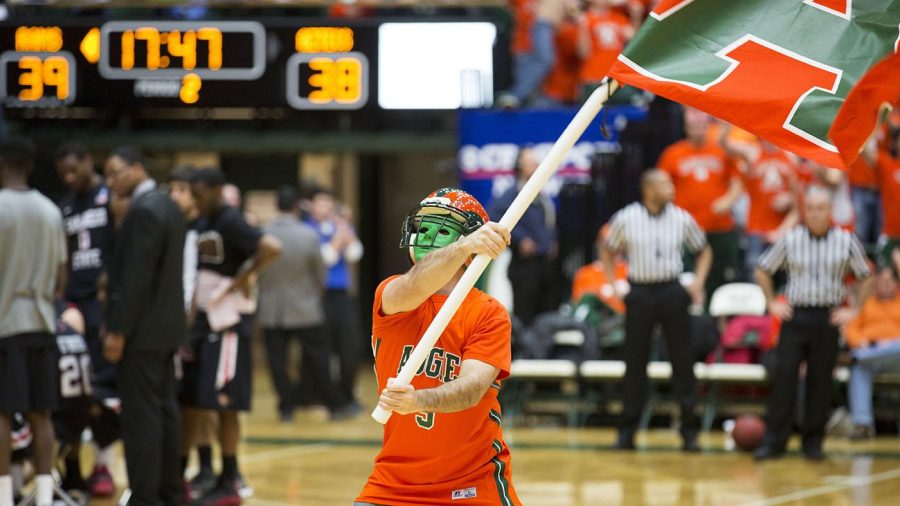 Director of Ram Ruckus, Tim Brogdon, begins the prelude to the popular Harlem Shake during the CSU vs. San Diego State game in Moby Arena on February 13th. Everyone attending the sold out game soon joined in for an arena wide Harlem Shake.

A new group says it’s doing everything it can to provide opportunities for the most spirited students on campus. It was their marketing department’s idea, for example, to bring the “Harlem Shake” to CSU.

“We kind of caught that on the perfect wave and we were the second school to do it live,” said Director of Ram Ruckus and CSU graduate Tim Brogdon. “It was fun. We have to do something like that again soon.”

Ram Ruckus is a student group that rewards those who show their support of the university during sporting events. For a $25 fee per academic year, a student can become a member of CSU’s official student spirit group, according to their website.

This fee provides priority seating, entry into a points program for attending games, information about special events and the occasional chance to go on trips to away games. As part of a recruitment drive, they will be taking students on a trip funded by the athletic department to Wyoming for the men’s basketball game March 6.

The program allows students to earn points for every home game they go to. With their points they can purchase hoodies, hats, gift cards to local restaurants and more from the Ram Ruckus site. The prizes have been donated to the program as part of partnerships between Ram Ruckus, the athletics department and the CSU Bookstore.

While there are dozens of other spirit groups in schools across the country, Ram Ruckus is unique in that it lets its members choose what rewards they want to purchase with their points.

“We wanted a student to be able to pick what they want, versus us giving them a lame bag or something. They can go on there and they can get a really nice hoodie or a cool hat,” Brogdon said.

Ram Ruckus was a student idea that started in August 2012. Their website states that they were “created by students, for students to engage in athletics and expand into every other aspect of student life.”

“I was really excited to be super involved with CSU athletics and when I heard about Ram Ruckus it seemed like a great opportunity to be part of it,” said freshman member and zoology major Brianna Gutierrez.

There were 413 members of Ram Ruckus at time of publication, with more students joining every day. The group is steadily gaining in numbers with their Facebook page at close to a thousand “likes.”

Part of recent popularity could be attributed to the success of CSU’s version of the “Harlem Shake” at the men’s basketball game on Feb. 13. Both the regular version and the extended version have over 80,000 views on YouTube, and got CSU mentioned in “USA Today.”

“I think the craziest part was how quickly it was coordinated. We had two days to spread the word and it spread fast,” said freshman member and journalism and technical communications major Blake Jarvis. “It was really fun, everybody seemed to be really into it, the whole crowd was willing to do it, and it worked out perfectly.”

While the focus right now is on athletics, Brogdon is hoping it won’t stop there.

“The group was created to foster excitement and create an awesome atmosphere, first in athletics and then moving into student life,” Brogdon said. “Later down the road we want Ram Ruckus to be donating blood at blood drives and we want them involved in community service; all based around that pride, that passion, that excitement, and that energy for CSU.”

More information on Ram Ruckus can be found at ramruckus.colostate.edu.