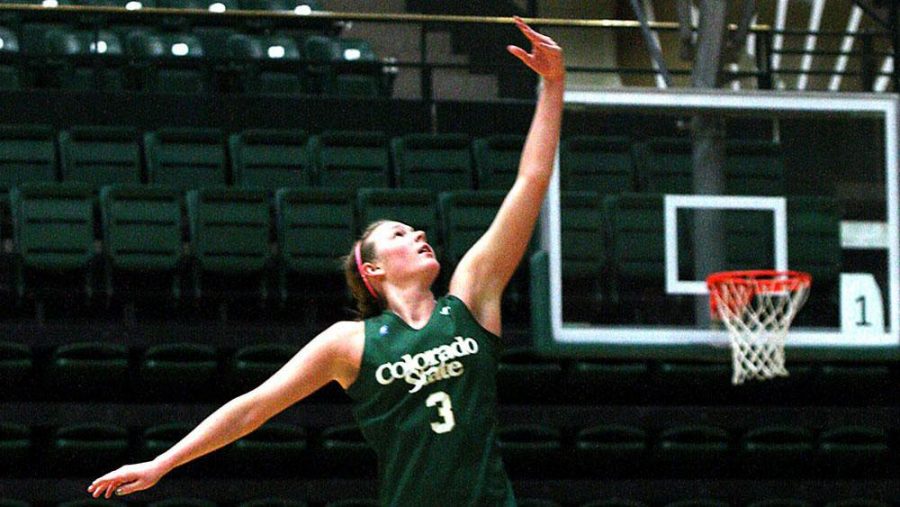 Junior Hayley Thompson gets some air for a layup at practice on Tuesday afternoon. The Rams will take on Fresno State tonight at 8 p.m. in California.

Bulldogs can be pretty ferocious, but in a head-to-head match up with a ram, they wouldn’t fare too well.

CSU is hoping for a similar outcome Wednesday night when they take on the second-place Fresno State at 8 p.m.

CSU has played excellent defense this season, holding teams to a 36.6 shooting percentage. However, in its last game against Boise State, Fresno shot 51.7 percent from the field and made a season-high 14 3-pointers.

The Bulldogs now have four players on the team who are averaging double-digit points per game, which will make defending them a very difficult task.

“We will have to focus on those four,” senior Meghan Heimstra said. “If one of those shooters is out on the perimeter, our inside girls were make sure to guard her.”

Fresno’s junior guard, Ki-Ki Moore averages 16.9 points per game, good for third in the Mountain West, and became the 18th Bulldog to cross the 1,000 point level against Boise State

The Rams are 8-3 all-time in games against Fresno State, although they lost their last match up at Moby in January. CSU gave up 13 first-half turnovers, which the Bulldogs turned into 27 points.

“We started off with a bunch of turnovers,” Heimstra said. “We only had three in the second half. Since then, we have been taking care of the ball really well.”

Taking into account the large amount of turnovers, the 69-58 loss could have been a lot worse. If CSU can fix those mistakes, the odds of them avenging themselves on Wednesday are high.

In order for the Rams to win, they will have to be vigilant with their passes and taking the ball down court.

“We will have to make the plays and get the stops,” sophomore LeDeyah Forte said. “We can’t let them do what they are comfortable doing.”

Forte came off the bench in the Rams’ first match up against Fresno, and racked up 12 points. Since then, Forte has greatly impacted the offense, leading the team with 87 assists.

“I’ve really tried to focus on the other players and getting everyone else involved,” Forte said. “I changed my mindset to a killer instinct.”

In January’s game, the Rams played a tough defense, forcing four shot-clock violations on Fresno and held them to a 48 percent shooting percentage, but it was not enough.

“I think we get out on the shooters really well,” Heimstra said. “But we will have to be sure every shot is contested and we rebound the ball really well.”

This time, the Rams don’t have home-court advantage or the live support of fans, and the the Bulldogs are 10-2 at home this season. However, both teams are 3-2 in the last 5 games, and Fresno’s most recent loss was delivered by last-place Nevada.

“We know we can play with this team,” Forte said. “We just have to play with confidence and get the ball in the hole.”