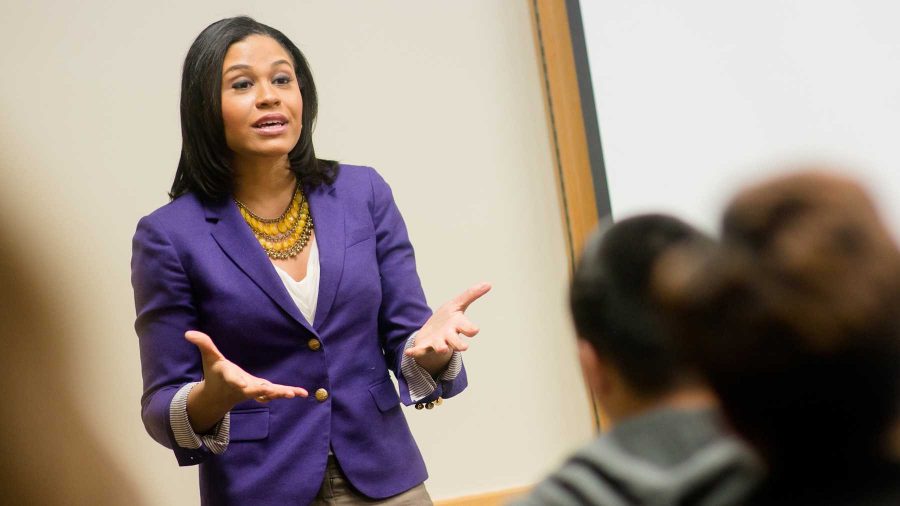 Meagan Fitzgerald of 9News speaks to a group of students in the LSC on Tuesday for CSU's Black History Month. She told the inspiring story of how she went from a poor reading level in Elementary school to now "reading for a living" for 9News in Denver, CO.

9News reporter Meagan Fitzgerald and school didn’t always get along.

“My reading was awful, my math was horrendous, so they placed me in these smaller classrooms so that I could, as they said, get the attention that I needed,” she said to a group of 20 students in a presentation Tuesday evening, organized by the Black Student Alliance as part of Black History Month.

Fitzgerald began the speech by describing her struggles as a young child growing up with a learning disability. She explained that when she was in second grade she was pulled from her regular classes and placed into specialized classes.

Fitzgerald went on to say that as she got older, she realized that she didn’t need to go that route any longer.

“It was middle school that I decided, ‘You know what, I’m capable,’” Fitzgerald said. “Whatever it is that I need to do, I’m going to do it.”

Then, she made the changes she needed to make the summer before high school.

“I was able to overcome that challenge of this learning disability that I had. I was able to make the dean’s list,” Fitzgerald said. “It was hard work, it was just sacrificing certain things to kind of get to the place that I wanted to be.”

Black History Month is a time to embrace where people have been and where that has brought people today, she said.

“There are people in the past who worked hard so that we can realize dreams even bigger than theirs,” Fitzgerald said. “Nothing is impossible. You truly can achieve anything you want to.”

Fitzgerald went on to explain that there are five important steps for people to pay attention to as they set out on achieving their goals.

Be aware of your image

“Be conscious of your image at all times,” she said to the group of millennial college students. “From Facebook to Twitter, to anything else that you do, your image is really all you have.”

“There is always going to be some kind of organization that you can be a part of and you can network people,” she said. “A lot of what I do is networking, it’s people that you know that will help you.”

“I never would have thought to send my stuff to Denver, but the agent did and that’s how that opportunity came to me,” she said.

Fitzgerald explained that no matter the circumstances, be it a learning disability or uncertainty about your major, a goal is always attainable.

“Set your sights high –– set your goals high,” she said.