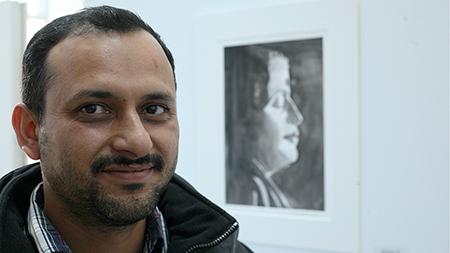 Mathematics PhD candidate Nand Sharma stands in front of his watercolor exhibit entitled "Upasana (Devotion)" in the new library gallery space outside of the Morgan's Grind Thursday. The entire collection is inspired by music, even the portraits or abstract pieces were created to represent various shades of music

Reptilian eyes stare at students waiting in line for morning coffee at Morgan’s Grind. They are paired with neutral watercolors depicting classical Indian musicians. It is an unlikely pair, but not when hanging on the walls.

The most recent display at the First National Bank Gallery in Morgan Library includes these and other works by deceased artist and CSU alumni Philip E. Sims, and mathematics doctorate candidate Nand Sharma.

Sims’ art reflects his veterinary work with reptiles and, to an extent, his love for dinosaurs. The colors are vibrant and the extreme close-ups of predatory eyes provide an unusual visual variety.

Sharma’s work is quite different. His sultry watercolors are influenced by Indian culture and music, a little piece of his homeland in India.

“I kind of had an idea of what I want to capture, which is something of an essence of the [classical Indian] music,” Sharma said.

According to Sharma, his art is an expression of his love of music and the subject matter connects him back to home.

“These paintings, in my opinion, present an opportunity to the international community to know more about another culture,” Sharma said.

Jane Barber, assistant director of communications and development, as well as freshman art major Marcus Stevenson, are coordinators for the gallery. It has been tucked in the corner to the right of the front entrance since 1997.

According to Barber, the displays change three to four times per year. Artists featured in the gallery are always connected to CSU in some way and have included students, alumni and professors.

Beginning Feb. 28, the displays will consist of art exclusively by CSU freshmen.

The students are part of the Arts and Creative Expressions community at CSU. It is a relatively new organization and the first students to have their work displayed as a group in the First National Bank Gallery.

Stevenson has spent about a month working on curating this project, even creating his own submissions for the showing.

Although an artist himself, the curation job is a fairly new experience for Stevenson.

“It requires a lot of planning and organization you don’t think of,” Stevenson said.

Stevenson and Barber will host the opening reception for the exhibit Feb. 28 from 4 to 6 p.m. The event is free and open to all.

With renovations on the library finally complete, students can expect even bigger and better things from the First National Bank Gallery.

The space has a new capacity to show work, giving students the chance to become more involved in the process along the way.

“We definitely want to have more art in the library,” Barber said.  “We have a lot of wall space.”