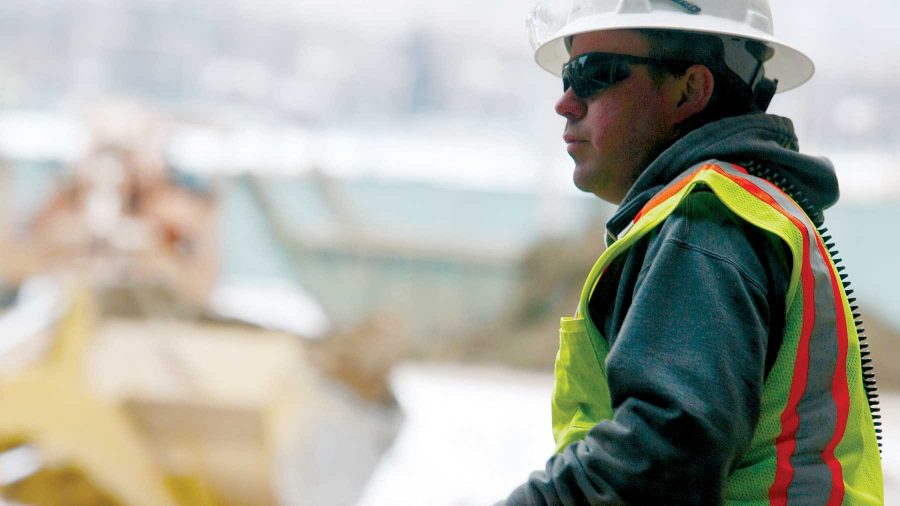 A construction worker surveys the former sulpture garden, while working on renovations for the Lory Student Center. The renovation has closed the ASCSU chambers, the Curfman Gallery, and the Sutherland Sculpture Garden.

Even with all the fences around the west and south sides of the Lory Student Center, the majority of the the building’s renovation project is not expected to commence until after

According to Doni Luckutt, director of marketing for the LSC, most of the offices within the LSC will leave after the end of the semester.

“One or two offices will be moving before then, but most will move out after commencement in May,” she said.

Two departments that have been affected by the renovations include the Curfman Gallery and the ASCSU Senate Chambers.

Doug Sink, program manager for the Lory Student Center Arts Program, said that the gallery has been able to adapt to the early close.

“The gallery housed many temporary exhibitions of artwork, so those were returned to the students and artists who designed them,” Sink said. “Some of the permanent artwork is being relocated to the north end while some is going off campus into storage.”

Sink said the gallery closed early so that construction workers could get a jump start on some footing work underground. He also stated that the student center has made a commitment to keep the artwork in the LSC.

“The Curfman Gallery will be back in the new student center, but in a new location,” he said.

The gallery falls under the LSC Arts Program, which encompasses many other parts of artwork in the student center, like the Gallery, which features many student artwork exhibitions.

Meanwhile, the ASCSU Senate had their last meeting in the Senate Chambers in the LSC on Wednesday, Jan. 30. According to Robert Duran, communications director for ASCSU, Senate meetings will take place in the Computer Sciences Building in Room 130.

“The renovation hasn’t affected our day-to-day operations much,” Duran said. “We’ve had to start moving our supplies into different storage units, but other than that there’s been nothing negative other than the construction outside our windows.”

ASCSU is scheduled to move to its new location in the MAC Gym in May. Despite the move away from the “academic center” of CSU, Duran believes that the new move might attract a new selection of students.

“We’ll be in a good location since so many students utilize the Rec Center,” he said. “The Rec Center might give students more reason to go to our offices, especially since all the other departments will be there in a centralized location.”

Other offices that are scheduled to move into the MAC Gym in May include SLiCE, the GLBT Resource Center, the Career Center and Greek Life. ASCSU President, Regina Martel, also hopes the offices in the MAC Gym will be inviting to students.

“The offices are supposed to be next to each other, which will make it convenient to talk to the other departments,” she said.

Despite the plans to move many offices to new locations for next year, Luckutt assured that many departments within the LSC would not be moving,

“The bookstore, Adult Learner Center, Student Legal Services, Cam’s Lobby Shop, Bagel Place II, the Transit Center and the north Ballrooms will not be affected by renovations,” she said. “Everything north of the bookstore will still be available.”

Luckutt also said there would be new food options available in the LSC next year, but she could not say what exactly.