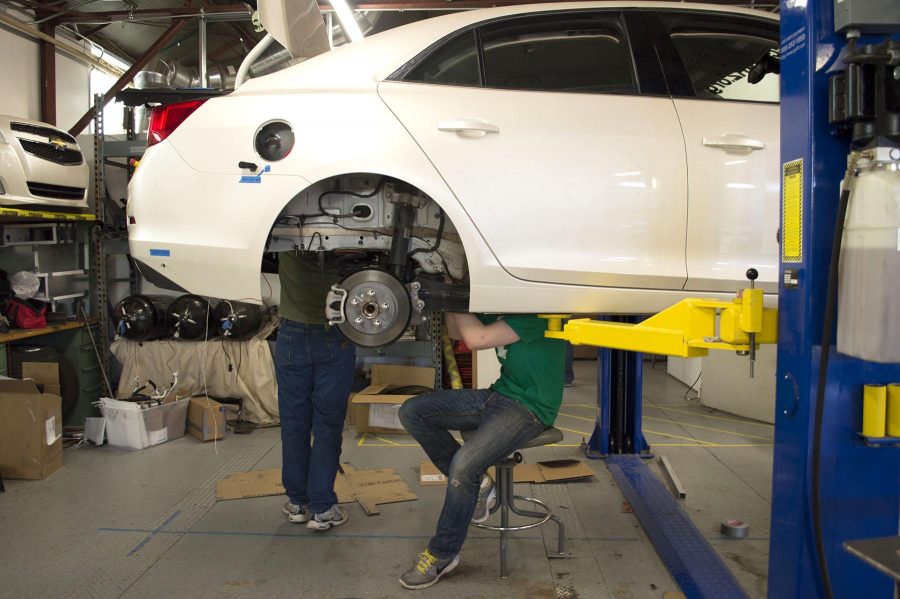 Engineering students work on their EcoCar 2, a project that originates from the Department of Energy and General Motors. The fully electric car is helping America secure its energy for the future.

Saturday morning, the history of motor vehicles appeared to be on display at the Motorsports Engineering Research Center in Fort Collins as a handful of students surrounded a Formula SAE car, and an all-electric car.

Side by side, students in the Ram Racing club and the EcoCAR 2 Project stood in a garage to build cars. Today, a nationwide program will launch in the center of this mecca for technology.

Today at the Fort Collins Museum of Discovery, CSU will be helping to launch the first-in-the-nation initiative to establish an electric vehicle deployment community.

A student project called EcoCar 2 will be at the launch. The project comes from the Department of Energy and General Motors. They asked universities around the country and in Canada to put together a senior design project that is related to hyper-electric vehicles.

“They gave us a blank slate and asked what does CSU think the future of the automotive industry will look like,” said Thomas Bradley, the faculty advisor for the EcoCar 2 project and assistant professor in the Department of Mechanical Engineering.

A group called Securing America’s Future Energy is a group of CEOs and others who are national security experts, according to Bradley.

“They want to improve America’s energy security for the future,” Bradley said. “They went on a nationwide search to determine a location that had all of the right ingredients to launch an electric vehicle effort so basically we can see if we can develop enough infrastructure, support and education to make electric vehicles.”

The group chose Fort Collins out of anywhere else in the nation.

“We have very progressive city and municipal utility. We have a long history of being at the forefront of various utilities technologies,” Bradley said.

The launch Monday is beginning at CSU because of the variety of projects involving vehicle electrification. According to Bradley, housing and dining services at CSU is putting in new technology, and the business school has electric vehicle charges.

“This is the first time we’ve announced that we have a new role in a national electrical project,” Bradley said.

The EcoCar 2 project incorporates a national initiative and CSU students to provide an educational experience.

“The great part is that this is absolutely integrated with CSU students’ education. We have opportunities at every turn for students to get involved in developing the technology and getting involved in the organization and to add to their education,” Bradley said. “It’s just all a part of CSU’s education and research mission.”

Allison Kotewicz, a senior engineering student, is one of the only women on the EcoCar 2 project and is on the storage energy team.

“What we’re doing is transforming how we use energy. It’s good to have a hands-on training about what engineering really is about,” Kotewicz said.

“It’s the car of the future, something that you’d buy (in) ten or 15 years,” said Jake Bucher, a mechanical engineering graduate student and team leader. “It’s our idea and conception of what they’ll be like.”

The goal was to reduce emissions and use fuel cells as energy so that no emissions would be released.

“It encompasses every point of building a car,” Bucher said. “It’s funded by Argon National Labs and General Motors. We have direct pathways to big companies for our future relationships.”

Another group related to mechanical engineering at CSU has been around since 1996: Ram Racing.

Ram Racing includes students from all years and majors; by the time the students are seniors they are well versed in building a car that runs on ethanol as their fuel source.

“We receive a small budget from the university; it would take $70 thousand to $100 thousand to build one of these cars,” Nagel said. “So we work hard for sponsorships and are mostly privately funded.”

Ram Racing is one of the most competitive motor sports program in the state according to Nagel.

“We’re really involved start to finish, all of us,” Nagel said.