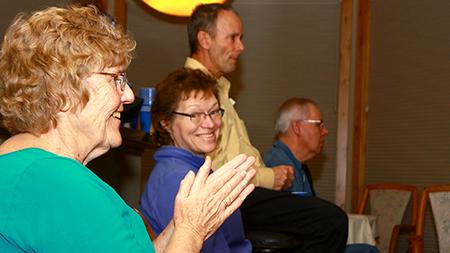 President Obama spoke to the nation in his State of the Union address Tuesday night. The president addressed what he plans to achieve in the next four years of his second term as president.

“I thought it was a very powerful speech, but it’s always just words first before anything happens. So you have to take everything he says with a grain of salt,” said Zachary Vaughn, junior biology major.

Kelsey Maez, a senior political science major and president of College Democrats at CSU, said she thought it was a great speech by Obama, overall.

“It was exactly what a State of the Union Address should be, an overall look at the next year as well as the next four years,” Maez said.

“I think he was aggressive and followed the general policy theme that you heard in the inauguration speech,” said John Straayer, a political science professor at CSU.

At the beginning of the speech President Obama spoke about keeping promises.

“Our government shouldn’t make promises we cannot keep, but we should keep the promises we have already made,” Obama said.

Straayer said that what struck him as odd was that Obama made references to how Medicare and Medicaid are eating up the budget and urged republicans to get on board for increasing revenues, but did not provide any further details on the subject.

“(Obama) was specific about the middle class, education, talking about the election, guns, and all that sort of thing,” Straayer said. “But he was not specific about Medicare and Medicaid, which was peculiar.”

President Obama was very specific about his plans for education, saying that college has been made affordable through tax credits, grants and better loans, but colleges must do their part to keep education affordable.

President Obama spoke of a “college scorecard” that will be released today, which provides an easy way for families to compare colleges on a simple basis, “where you can get the most bang for your educational buck.”

“CSU is really going to benefit from the scorecard and the parents and students sitting down and looking at that,” Maez said.

“CSU is affordable with top notch professors and one of the best science programs in the nation,” she continued. “Students will see what a great education they can get for a low cost.”

Straayer said he feels that campaigning for higher education is good, but more federal controls are problematic.

“(Obama’s) talking a lot about imposing standards that have been imposed on K through 12 schools and putting a stamp on the cost of higher education,” Straayer said.

“I appreciate the President’s call to bring knowledge appropriate for a high tech world into high schools, as well as addressing the needs of employers in the creation of a curriculum,” Vaughn said.

Obama also addressed immigration, rebuilding American towns that have been hit with disaster, concluding the war in Afghanistan, helping countries in poverty around the world and gun control.

The CSU College Republicans could not be reached for comment.