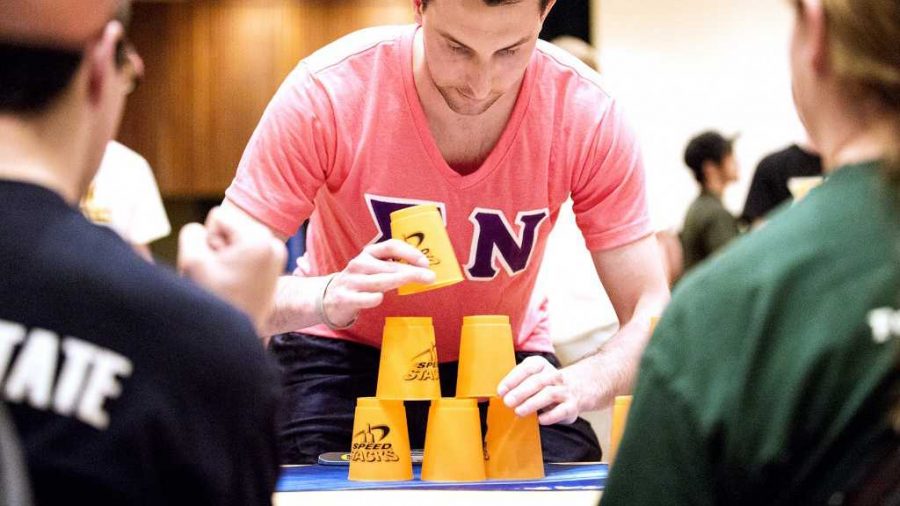 Many chapters of CSU’s Greek Life spent their Sunday morning participating in a cup stacking event that was held in honor of world champion cup stacker, Chris Engel, a Kappa Sigma member who passed away in 2012.

“I wanted Greek Life to be involved with something meaningful,” Pi Beta Phi member Emma Lanham said. “We want to do philanthropy events together, not just socials.”

“Emma came up with this idea, and recruited me to help. We wanted to do it for Chris Engel and his family,” Kappa Sigma member Drew Harris said. “This means the world to his family.”

For this being a first time event, Harris and Lanham said the turnout exceeded their expectations.

To get in the door there was a two dollar charge, and to participate in the cup stacking there was a five dollar charge. All of the proceeds made at the event are being donated to the Chris Engel Scholarship Fund.

The Northern Colorado chapter of Team USA for cup stacking attended the event, showing off their fast stacking times and helping some Greek Life members learn how to stack.

“This event is cool because we went to Chris’s elementary school. It’s cool to be here because (Chris) helped get cup stacking started,” Team USA member, Segovi Garcia, 13, said.

Members of Greek Life interviewed said that all of Greek Life had been excited about this event and have been practicing their skills for awhile.

“We had cup stacking club Tuesdays, and we’d all practice,” Lanham said.

Harris said it was a team building experience and that a lot of people showed up.

“I think its been a really great experience. I’ve been practicing since December. It’s so great to see all different age groups come together,” Pi Beta Phi member Nicole Versace said.

Along with the nine different CSU Greek Life chapters that participated in the event, Engel’s family also attended.

Chris Engel passed away in 2012 from a brain injury caused by a fall at a concert. As an organ donor, Chris saved the lives of four people.

“It was a tragic way for him to lose his life, but the world is a better place because of him,” Mike Engel, Chris’s father, said.

“Its nice that they put together this event to bring together Greek Life,” David Engel, Chris’s brother, said.

“It is a great honor to be a part of this event,” she said. “It was a tragic event and I hope that the kids look out for one another and that this doesn’t happen to anyone else.”

“We love and miss him very much,” she said.