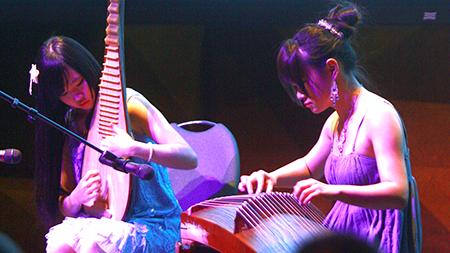 Since it’s the Year of the Snake, the next 12 months will be a time to save and be thrifty with money –– at least according to the Chinese calendar.

Chinese New Year was ushered in Saturday night at the Lory Student Center Theatre by approximately 350 students and community members, who filled the building for two-and-a-half hours to watch traditional performances including dancing, kung fu demonstrations and singing.

The event, hosted by the Chinese Students and Scholars Association, had been in planning for over six months, CSSA Vice-President Hai Xia said.

With many Chinese students at CSU away from home for the first time, the evening was an opportunity to stay connected to their culture.

“It’s a good chance for everybody to feel the feeling of the Chinese New Year,” Xia said. “Tonight people can feel like they’re home with friends and family.”

Xia said the new year is one of the most important holidays in China. Although there are many cultures in the country that celebrate the occasion, there a few common things every community does.

No matter where a person is in China, for example, they will make their way back home to see their family. Gifts wrapped in tiny red boxes are exchanged, large meals are served, firecrackers are lit and parades are watched on television.

Even though he was in China a mere 30 hours earlier and was suffering from jet lag, senior director of international student and scholar services Mark Hallett took the stage to talk about CSU’s deepening relationship with China.

The university plays host to more than 300 Chinese students and the Confucius Center at CSU has entered into partnerships with prestigious organizations in China.

“CSU continues to deepen its relationship with China on so many levels,” Hallett said.

The highlight of the evening occurred when a CSU student was pulled on stage and given a quick lesson in how to say “hello” and “happy new year” in Chinese.

The crowd laughed and cheered as the student nailed each expression perfectly.

Dressed in an exotic and brightly colored outfit, Master Zhao Naiyi performed a face-changing magic show. As he danced across stage, his mask would change in the blink of an eye to something entirely different, drawing applause from the crowd.

Bessie Zhang, a junior finance major, arrived at CSU from Shanghai for the spring semester. She had been feeling homesick and the evening was an opportunity to reconnect with her culture.

“I really enjoyed the show,” Zhang said. “It  made me feel like I was back home for a few hours.”

Kyle Avrett, a sophomore computer science major, came to the show to see his roommate perform in one of the comedy skits.

“The pride displayed by the international students even though they’re away from their home country is really inspiring,” Avrett said.